Shakespeare References in If I Should Die Before I Wake 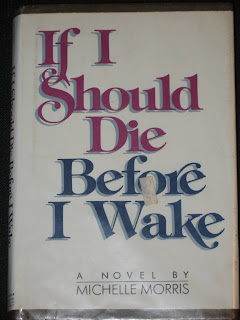 If I Should Die Before I Wake, Michelle Morris’ moving novel about a girl suffering abuse at the hands of her father, contains several Shakespeare references. The first is to Hamlet: “I want to reach out to you, but first I must build my courage. Until I do, I will probably be like Hamlet, agonizing my life away” (p. 12). There is another reference to Hamlet later in the book: “And perhaps the slings and arrows of our outrageous relation to each other can be quantified” (p. 117). There is also a reference to The Merchant Of Venice: “What kind of payment this time, Daddy? You Shylock of my freedom. What pound of flesh will you exact so I may earn a breath of precious air?” (p. 52). And there is a reference to Romeo And Juliet: “When I opened the window he was standing right outside in the moonlight, and I could see his hands clasped together like Romeo’s, only he was saying, ‘Rapunzel, Rapunzel, let down your hair’” (p. 70).

The novel contains a couple of references to Macbeth. The first comes in a passage that the girl addresses to her father: “Innocent sleep, that ‘balm of hurt minds’ Macbeth speaks of, is not possible for us” (p. 139). She then continues: “We murder sleep” (p. 139). These lines are of course references to Macbeth’s speech after he has murdered Duncan. The second reference to this play comes just a few pages later: “A smell that cannot be extinguished. My body as hopeless of cleansing as Lady Macbeth’s blood-drenched hands” (p. 142).

There are also references to Othello, after Dean hands Carla his handkerchief. Carla tells him: “All right, Dean, but let’s make it a real romantic thing then. I’ll embroider some strawberries on it and give it back to you. Just like in Othello” (p. 150). Dean replies that she’ll have to explain the reference, adding “Our class read Julius Caesar” (p. 150). Carla obliges: “Well – Othello gives his wife this handkerchief embroidered with strawberries. It was one his father had given his mother years before. So to Othello, of course, it is a treasure. He gives it to Desdemona when they’re first married – as a pledge of his love” (p. 150). Dean then replies: “That means you’re Othello then. And I’m Des-mona, or whatever her name is” (p. 151). Michelle Morris then writes: “But it did seem right for us, because I understand Othello. And Dean is as beautiful as Desdemona ever was” (p. 151). Dean asks how the story turns out. Carla says: “The play? Oh. Well, it’s a tragedy, of course. So you can’t expect… I mean. Well – uh, he kills her actually” (p. 151). Dean responds: “Othello? Kills Des-mona?” (p. 151). Carla explain that Othello does love Desdemona, right to the end, to which Dean replies, “Sick.” Carla then says: “No, no. You don’t understand. It was because of Iago. And all the lies he kept telling” (p. 151). There is then a reference to Shakespeare himself: “There I was, Jessie – do you believe it? Making excuses for Shakespeare!” (p. 151).

If I Should Die Before I Wake was published in 1982. The copy I read was a first edition.
Posted by Michael Doherty at 5:29 PM