Shakespeare References in Translating LA: A Tour Of The Rainbow City 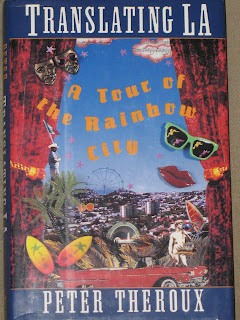 Peter Theroux’s book about Los Angeles, Translating LA: A Tour Of The Rainbow City, contains a few Shakespeare references. The first two come together in a section about a certain teacher: “They were both in her eight-grade English class, which was doing Shakespeare. ‘I’m Juliet – he’s Mercutio’” (page 159). The other references are to Hamlet, and appear in a section on the cemeteries of Los Angeles. Theroux writes: “The sarcophagus, engraved DOUGLAS FAIRBANKS 1883 – 1939, has a backdrop of marble columns and a portico with a portrait of Fairbanks in copper bas-relief. The sarcophagus is inscribed: Good Night Sweet Prince, and Flights of Angels Sing Thee to Thy Rest. Tyrone Power’s grave nearby – it is a marble bench – displays three quotations from Hamlet: ‘There is a special providence in the fate of sparrows…’ and ‘If it be now, ‘tis not to come,’ plus the ‘Good Night Sweet Prince’ passage” (pages 188-189). I haven’t been to Tyrone Power’s grave, but I have to wonder if it says “fate” rather than “fall,” for the line is “There’s a special providence in the fall of a sparrow.” Also, the “If it be now, ‘tis not to come” line comes directly after the line about the sparrow, so that is really just one passage.

Translating LA: A Tour Of The Rainbow City was published in 1994. The copy I read was a first edition.
Posted by Michael Doherty at 6:30 PM