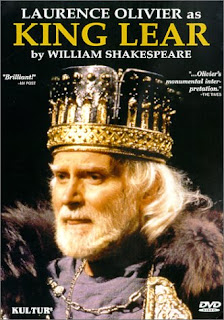 This is an excellent television film version of the play, and I think is the best of Laurence Olivier’s Shakespeare films (though I haven’t yet seen his Merchant Of Venice). In addition to an incredible performance by Olivier as Lear, this film boasts excellent performances by Robert Lindsay as Edmund, Leo McKern as Gloucester, Dorothy Tutin as Goneril, Diana Rigg as Regan, and John Hurt as The Fool.

Gloucester’s “and away he shall again” seems to catch Edmund by surprise, a nice moment. Lear enters with Cordelia (Anna Calder-Marshall), who of course is dressed in white. The map is spread out on the floor. Albany (Robert Lang) seems a bit surprised at hearing of Lear’s intention to divide the kingdom. There is something playful in Lear’s asking of his daughters which loves him most, as he feels he knows the answer and is kind of having a bit of fun. This production follows the Quarto in having Lear say “Although our last, not the least” rather than the Folio’s “Although our last and least.” Lear at first doesn’t believe he’s heard correctly when Cordelia says “Nothing.” Laurence Olivier is excellent here, showing he is hurt before he turns against Cordelia. Kent’s “Lov’d as my father, as my master follow’d/As my great patron thought on in my prayers” is cut. On “O vassal,” Lear raises his sword to strike Kent, but is held back. Lear rearranges the order of “Without our grace, our love, our benison,” saying, “Without our benison, without our grace, our love.”

Edmund delivers his speech directly to the camera, the first part of it in an extreme close-up. Gloucester delivers his first several lines to Edmund with joviality, a good humor. The camera moves in on Edmund again for his “This is the excellent foppery of the world” speech, going to an extreme close-up so that he can speak intimately with us. Edgar arrives on horse. Much of their dialogue is cut from the beginning, with Edmund immediately asking, “When saw you my father last?”

The third scene takes place in a dining hall.

Kent is well disguised in this production, with his beard shaved, his hair different, and a blanket used as a hooded cloak, helping to partially conceal him. He speaks with a different accent. Lear enters on horse, and this production shows us his many rowdy followers as they enter the dining hall. Oswald ducks under Lear’s swing at him, giving a different meaning to his line, “I’ll not be strucken, my lord.” The Fool is an adult in this production, but not so old as Lear. He does not use a real egg, but instead mimics the action of breaking it. Lear’s men react when Goneril says, “Men so disorder’d, so debosh’d, and bold.” This is great, because it gives Goneril’s stance some validity, at least at first. Goneril’s reactions are wonderful in this scene. Lear smacks himself on the forehead for “Beat at this gate that let folly in.”

Laurence Olivier is superb in the scene with his Fool, each line delivered with such honesty and truth, and showing a gentle weariness and vulnerability. This scene also makes his relationship with the Fool so clear, the concern the Fool has for him so apparent.

The first scene begins with Curan telling Gloucester, not Edmund, that Cornwall and Regan will be arriving. Gloucester then turns to alert his men about it. Edmund then goes to Edgar and tells him to “fly this place.” Edgar does draw his sword at Edmund’s urging, and then falls after Edmund hits his sword once, not expecting it, a nice touch. He quickly gets up and when Edmund hits his sword again, Edgar remains on his feet. Edmund gives a meaningful look to Regan on “Truly, however else.”

Regan herself pushes the stocks closed on Kent’s legs, and then Oswald kicks at the stocks.

Edgar runs at the beginning of the third scene, being chased. As he talks about his disguise, he begins to take on that form.

Laurence Olivier is incredible in the fourth scene as well. On Lear’s “terrors of the earth,” we begin to hear the rumbling of the storm.

The first scene with Kent and Gentleman is cut.

The storm is a heavy rain as well as lightning and thunder. At first, Lear stands alone, shouting at the heavens. The Fool then approaches and crouches at his feet.

In the fifth scene, Edmund’s aside is cut.

The Fool’s “And I’ll go to bed at noon” is given in a close-up. The Fool then does stay behind, shivering.

There is a nice shot of Edmund between Goneril and Regan, and also a good reaction shot of Cornwall, who perhaps now suspects something there. Regan spits at Gloucester on “O filthy traitor.” I love Gloucester’s delivery of “What will you do?” You can hear the sudden fear in his voice. There is a nice, gory shot of Gloucester without his eyes. I love Regan’s heartless, casual delivery of “let him smell/His way to Dover.” Wow, Regan is so cold in this production. When Cornwall asks for her arm, she makes no move toward him, but watches as he collapses. The servants’ lines are cut from the end of this scene.

Most of Edgar’s first speech is cut. The scene begins with “But who comes here?”

Scenes 3 and 4 are completely cut.

At the end of the fifth scene, as Oswald walks away from Regan, he tears up the note she has given him, a nice touch.

Edgar and Gloucester do walk up a slight incline, which takes a bit away from the joke of Gloucester’s “Methinks the ground is even” and Edgar’s “Horrible steep.” We haven’t seen the ground in front of them when they stop, so someone new to the play could believe they really do stand at the edge of a cliff. Gloucester kneels at what he believes is the edge, and only after he has fallen forward does this film reveal the ground is flat, and he is on some sand. Lear seems to be surviving well on his own in the wilderness, having caught himself a rabbit to eat. Edgar’s “O thou side-piercing sight” is cut, and Lear is alone for several lines. We don’t see Edgar and Gloucester until “Sweet marjoram.” When the three Gentlemen help up Lear, the one Gentleman says, “Sir/Your most dear daughter, Cordelia, Queen of France.” In the play, the line ends with “daughter,” so we can imagine Lear thinks the man means either Regan or Goneril. It doesn’t work if he actually says “Cordelia,” unless we are to think Lear doesn’t hear him. Gloucester touches Edgar’s face on “The bounty and the benison of heaven,” then leans forward, as if possibly recognizing his son. Oswald enters on horse. Edgar runs him through with his walking stick.

Rather than Lear being carried in, Cordelia and Kent are led to his bedside by the Doctor. They have shaved Lear’s beard. Lear’s lines “Let’s see/I feel this pin prick” are cut. The reunion of Lear and Cordelia is very moving, as it should be.

The first few lines are cut. It opens with Regan’s “Sweet lord.” Edmund’s speech about the two sisters follows directly after Goneril’s “I will go.” Then Edgar enters to speak with Albany.

There is a brief shot of battle before the second scene. Edgar sits Gloucester down on a flat stone and so says “take the protection of this holy stone” rather than “take the shadow of this bush.”

After “Take them away,” Lear stops them by putting his chained hands around Cordelia. The Captain immediately opens Edmund’s note and then looks up at him, surprised by its instructions. Goneril says, “Or I’ll ne’er trust poison” instead of “If not, I’ll ne’er trust medicine,” a weak and unnecessary change. But what’s great is that when Regan says “My sickness grows upon me,” she looks to Goneril, then walks toward her, correctly guessing the cause. A great moment. Edgar appears with a chain mail helm covering his face. The fight is pretty good and is not over too quickly. After Edgar’s “burst smilingly,” the Gentlman enters, “Help, help,” thus skipping Edmund’s important lines showing a change of heart. Albany’s lines asking Goneril and Regan’s bodies to be brought out are cut. Also Albany’s “Great thing of us forgot!” is cut. After Edmund’s “hang Cordelia in the prison,” Edmund dies. Edmund is not borne off. Lear then enters carrying Cordelia. Kent says, “Your servant Kent, who was your servant Caius” rather than “Your servant Kent. Where is your servant Caius?” The button Lear asks to be undone is his top button. Edgar delivers the final lines, as in the Folio.

This was directed by Michael Elliott. It is 157 minutes.