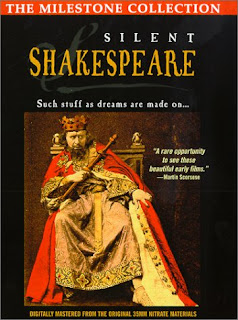 This silent film version is one of the earliest films of King Lear that I’m aware of. It was produced in 1910 in Italy, and it stars Ermete Novelli as King Lear and Francesca Bertini as Cordelia. It was directed by Gerolamo Lo Savio. It is strangely partly colorized by hand, so the robes and such are in color while the faces are in black and white, giving it an odd look.

The film opens with Goneril and Regan professing their love. Lear holds the map on his lap, and the Fool kneels by his side. The Fool is smiling and nodding his head while Lear divides up the kingdom, so not quite in line with what Shakespeare wrote for that character. Kent is banished and then France appears to claim Cordelia. The stuff with Burgundy is cut. The second scene is cut. In fact, the entire subplot regarding Gloucester, Edmund and Edgar is cut. Kent is disguised and he throttles Oswald, pushing him to the ground. Oswald is still defiant, and he exits. Interestingly, Lear pulls the Fool to the ground at his feet (after petting a dog). Lear’s curse of Goneril is depicted, with Lear pointing at her belly, then shaking his head.

Oswald isn’t as much of a coward in this production, and actually seems to draw first on Kent (it’s hard to tell just when Kent draws because he’s out of frame at first), and there is a sword fight where Oswald seems the aggressor, pushing Kent back. When Regan arrives, Kent tosses his sword away. Kent is almost immediately put in the stocks, and then Lear arrives, demanding Kent be freed. And Kent is freed. He’s in the stocks for twenty seconds in this film. Lear confronts Regan, and Goneril shows up, and Lear begins to weaken and express vulnerability, and has to be helped off by the Fool.

It seems the storm might be mainly in Lear’s mind, for there is no rain, and it looks like a fairly nice day, though the Fool shivers as if cold. Lear looks up to the heavens, as Kent tries unsuccessfully to usher him off to shelter. Gloucester and two men enter to aid Lear, and Kent exits. Gloucester, the Fool and the two men carry Lear off.

We then go to Kent informing Cordelia and France of Lear’s condition. The film shows Lear in his madness using a broom to sweep dirt from the ground. Gloucester is there to speak with him, but has not been blinded. And interestingly, Kent shows up with the Gentlemen to take Lear to Cordelia. Lear gets on his broom and pretends to ride it away, rather than running off. When Lear awakes in the French camp, he sits up and looks at his hands, with Cordelia and Kent standing in the background, watching. When they approach him, Cordelia sits at the foot of his bed and Kent stands at the head of it, creating a nice image for Lear’s recognition of them. Kent helps him to his feet, and Lear seems refreshed, revitalized.

The next shot is Lear and Cordelia being led off to prison. And then it gets a bit strange, a bit too rushed. Gloucester enters with a message, followed by Kent. And then Lear re-enters, carrying Cordelia. This is all one shot, and only twenty-seven seconds pass from the time Lear and Cordelia exit to when Lear returns with her body – hardly enough time for the order for her hanging to be delivered and carried out, for Lear to kill the man who did the hanging, and for him to pick up her body and return. Lear does hold something over her mouth to see if she’s breathing. And then soon he collapses and dies. The film ends there, as Edgar was completely cut from this version.