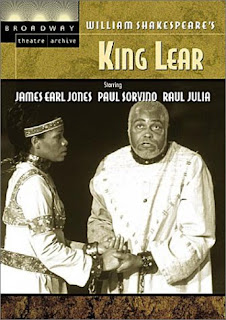 This is a taped live performance of a New York Shakespeare Festival production of King Lear from 1974, with James Earl Jones in the title role. The entire cast is pretty remarkable, and includes Paul Sorvino as Gloucester, Raul Julia as Edmund, and Rene Auberjonois as Edgar. Hal Holbrook introduces the program, and there is a bit of backstage footage before the play. Joseph Papp then introduces the play. At times, you can see one or another of the cameras, as this was a taped live performance rather than a performance put on specifically for television. Also because of that, there are moments – and just a few – when you wish a camera had covered a different character for a line. That being said, this is an incredible production by a talented cast.

Gloucester and Kent (Douglass Watson) enter together, with Edmund standing apart from them until Gloucester motions him forward. King Lear enters with sword in hand. He leans on the sword as he delivers his first big speech. The map is spread out on the floor. Lear seems very serious even before Cordelia says “Nothing.” This production follows the Folio version in having Kent say “Reserve thy state” rather than the Quarto’s “Reverse thy doom.” On “O vassal,” Lear raises his sword as if to attack Kent, but is held back. As Lear and his retinue exit, one man comes over to embrace Cordelia, that being the Fool. (The Fool in this production is older, with white in his beard, but not as old as Lear.)

This production uses the eighteenth century emendation “top th’” in place of “taw th’” or the Folio’s “to’th” or the Quarto’s “tooth,” and in the same line Edmund hits on every syllable of “legitimate,” getting a laugh from the audience. Paul Sorvino is excellent as Gloucester when he turns to Edgar after reading the letter and asks, “Conspiracy?” Gloucester takes out his sword just before “I’ll apprehend him.” Edgar then takes the sword from him and re-sheathes it on “if you violently proceed against him.” Raul Julia does a great job with the “This is the excellent foppery of the world” speech, though I have mixed feelings about his gesture after “lecherous.” And rather than “Fut,” he makes a sort of fart noise to accompany the gesture.

Kent’s disguise is mainly the shaving off of his beard. By the way, Douglass Watson does an excellent job in the role. There is a great moment between Lear and the Fool (Tom Aldredge) after the Fool asks, “Can you make no use of nothing, nuncle?” Lear gives him a look that lets us know he knows precisely what the Fool is referring to, and pauses as if controlling himself so as not to respond in anger. James Earl Jones is fantastic here. The Fool does cut an egg in two, and puts one half of the shell on Lear’s head as a crown. Lear simply looks at the Fool, who takes it off again. I love Goneril’s looks toward the Fool.

When Edmund tells Edgar to draw, Edgar is too distracted and Edmund himself draws Edgar’s sword and hits that sword against his own to create the sounds of a fight. There are some nice moments between Regan (Ellen Holly) and Edmund, showing Regan’s interest in him.

The exchanges between Kent and Oswald (Frederick Coffin) are totally enjoyable. After Kent is put in the stocks, a man rushes in, hands him the letter, then rushes out.

Edgar says he will grime his face and so on, but he’s already done so to a certain extent. He enters the scene shirtless, shoeless and filthy. So it seems odd for him to describe the disguise he will adopt when he’s already adopted it, or at least part of it. He does take off his pants as he speaks, however.

James Earl Jones is excellent in the scene where he begins to lose it, upset that Kent is in the stocks, upset that Regan and Cornwall do not attend him immediately. And then he displays a heartbreaking vulnerability when speaking to Regan. And I love his delivery of “I prithee, daughter, do not make me mad.”

The first scene, with Kent and Gentleman, is cut.

The storm is done by a constant rumbling and also by some lighting cues, but mainly shown by the performances of Lear and the Fool.

On his line “But where the greater malady is fixed,” Lear touches his head with both hands. When we see Edgar at Tom, his disguise has reached a more extreme state than when we last saw him, with straw in his hair and eyes drawn on his forehead. Rene Auberjonois is wonderful as Edgar, completely immersing himself in his Poor Tom role. Lear imitates, adopts some of Edgar’s gestures, as if learning from him, which is excellent.

After the Fool says he’ll go to bed at noon, he lies down with Lear and Poor Tom. When Gloucester enters, Edgar gets up and scurries off.

Gloucester’s blinding is perfectly savage and cruel. The servants’ lines at the end of the scene are cut.

When Edgar enters, he has returned to his earlier state, still dirty and near-naked, but without the straw and the eyes drawn on his forehead. When Gloucester says “O dear son Edgar,” Edgar takes a half-step toward him, a nice moment.

Albany (Robert Stattel) is wonderful in the second scene. I especially like his quiet delivery of “What have you done?”

The lines about the Marshal of France are cut, as are the last few lines of the third scene. This one ends with Kent’s “Will in concealment wrap me up awhile.”

Regan’s final lines from the fifth scene are cut.

Gloucester pauses before going over the cliff, and then he drops rather than jumps. So you can read it as allowing himself to fall to his death or as fainting. The reunion of Lear and Gloucester is touching, and there is humor in the scene as well. Men enter slowly and surround Lear. He then leads them in a chase upstage.

Lear is carried in on a bed by four men. He begins to sit up after “I will not swear these are my hands.” The following lines, “Let’s see./I feel this pinprick,” are cut. When Cordelia tells Lear he must not kneel, she and Kent help him to his feet. And, of course, when Lear recognizes his daughter, it is a powerful moment. The lines about Edgar are cut from the end of the scene.

The drums continue through the second scene, where we focus on the blind Gloucester while the battle occurs off stage.

When Edmund commands his men to take Lear and Cordelia away, Lear picks up the ropes that bind them as if to hold for a moment to speak with Cordelia. Then, when he is ready to go, he gives the ropes a gentle shake, as if to motion his own horse forward – a superb moment, showing Lear back in charge of his life even as others take him to prison. Goneril’s “If not, I’ll ne’er trust medicine” gets a laugh from the crowd. Rather than throw down a glove, Edmund spits at Albany’s feet before saying “There’s my exchange.” Edgar enters masked. Then before the fight he removes the mask and both he and Edmund are blindfolded, which is odd. They fight blindfolded. Some lines are cut, and we go from Edmund’s “And shall perchance do good” right to the Gentleman’s “Help, help!” Goneril and Regan’s bodies are not called for, nor brought on stage. Lear’s “Howl, howl” is spoken rather softly, not shouted. Oddly, the line announcing Edmund’s death is cut. Lear points to the back of his shirt when asking to have the button undone, and Kent steps forward to undo it. Lear is standing at this point, and when he says “Look on her,” he is facing upward and points to the sky, an interesting choice. So then when Edgar says, “Look up, my lord,” it is as if he is seeing Lear’s ghost where Lear had just seen Cordelia’s, and so perhaps the two are joined. Edgar speaks the last lines of the play, as in the Folio.