Shakespeare References in His Picture In The Papers 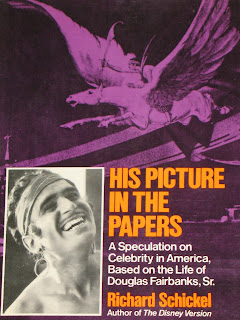 His Picture In The Papers: A Speculation On Celebrity In America, Based On The Life Of Douglas Fairbanks, Sr., by Richard Schickel, contains several references to Shakespeare. As you might guess, there is mention of Douglas Fairbanks’ version of The Taming Of The Shrew, but there are also several other references throughout the book.

The first is in a passage in relation to Fairbanks’ father. “More important, he attributed his interest in the stage to his father, who had been an amateur Shakespearean scholar and was wont to recite from The Bard at the smallest excuse” (page 16). And then, related to when Douglas would get into trouble: “The reward for his transgressions was often the enforced memorization of some Shakespearean passage, and that work – along with the one part of the school week that he looked forward to, the Friday recitations – surely helped bend the twig” (page 17). That passage continues, with a reference to Julius Caesar: “In any case, by the time he was in his teens, his neighbor Burns Mantle, later to become a well-known drama critic (and editor of the annual Best Plays volume), said, ‘he would recite you as fine and florid an Antony’s speech to the Romans as you ever heard. With gestures, too’” (page 17).

This book contains a few mentions of Hamlet. The first is related to an early stage performance by Douglas Fairbanks: “His big chance came in Duluth where he went on as Laertes in Hamlet on short notice. ‘Mr. Warde’s supporting company was bad, but worst of all was Douglas Fairbanks,’ the local critic wrote. Warde himself was to call the young actor’s first season ‘a catch-as-catch-can encounter with the immortal bard’” (page 20). The second is in a passage about Charlie Chaplin: “’Now I am alone,’ he said to himself, quoting Hamlet” (page 36). The third is in relation to a radio broadcast: “Barrymore recited a Hamlet soliloquy” (page 120).

Of course, there is quite a bit about The Taming Of The Shrew, including a photo of Douglas Fairbanks in the role in the photos section of the book. Richard Schickel writes: “Fairbanks and Pickford decided to combat the threat by combining their prestige, co-starring in The Taming Of The Shrew, which, of course, attached their names to the greatest dialogue writer in the language. No one could fault the shrewdness of their decision as a career move. The industry’s de facto leaders seemed to be welcoming the new technology, demonstrating that the addition of sound opened to film vast realms of great drama and literature that heretofore it had never truly been able to encompass effectively. Moreover, Fairbanks was right for the part of Petruchio, while Miss Pickford, struggling still to change her image, was interestingly offcast as the shrew” (page 122). Schickel continues: “Fairbanks’ essential egoism was quite suitable for a shrew-tamer, but his voice came through the microphones rather high-pitched, while his wife was less mercurial, perhaps, than she should have been – and had in other roles proved herself capable of being. The production itself, adapted and directed by Sam Taylor, was flat and stagey and carried a now legendary credit, perhaps funnier than anything in the action of the film itself – ‘By William Shakespeare. Additional Dialogue by Sam Taylor’” (pages 122-123). And then: “Hurting financially, his films declining in popularity to the nadir represented by Shrew, a sense of estrangement (though by no means an open breach) growing between Mary and him…” (page 123). Schickel then writes: “He returned and, for the last time, devoted himself seriously to a movie, one that he thought would be more suited to the temper of the times and to his own age than the historical romances – or Shrew – had been” (page 125).

Schickel makes a reference to Othello: “Perhaps having loved not wisely but well, the public compensates, when it turns away from an idol, by doing so too emphatically, too cruelly” (page 153). In Othello’s final speech, he refers to himself as “one that lov’d not wisely but too well.”

And then, about Mary Pickford at the time of the book’s writing, Schickel says, “She tells inquirers that she reads the Bible and Shakespeare” (page 161).