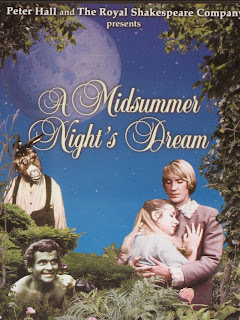 The first scene begins as an exterior shot for Theseus (Derek Godfrey) and Hippolyta’s conversation. Hippolyta (Barbara Jefford) seems excited about their upcoming marriage. Several lines are cut after Theseus says “To you your father should be as a god,” going right to Hermia’s “I know not by what power I am made bold.” The problem is that the boldness to which she refers is contained in the lines cut. Just before Lysander (David Warner) mentions Helena, we see Helena (Diana Rigg) step into frame outside in the background. She then steps around a column and out of sight. When the others exit, Hermia (Helen Mirren) and Lysander are framed so that Hermia is on the far left of the screen and Lysander is on the far right, separated by the two vacant thrones upon which Theseus and Hippolyta sat. David Warner plays Lysander as quite serious. After Lysander’s line “So quick bright things come to confusion” the two are suddenly on a boat, and Hermia says “If then true lovers…” A very odd choice, especially as we already saw Helena lurking about at the earlier location. Plus, then Lysander has to call from the boat when he sees Helena, and their conversation has to be done in shouts. But then suddenly Hermia is seated next to Helena on the grass. And in the reverse shot of Lysander approaching, there is no water in the background. What the hell? All of the fun lines between Hermia and Helena regarding frowns and curses are cut. Helena performs her final speech of the first scene to camera, and this bit is done with several shots, all exteriors. Diana Rigg does a really good job with it.

When Quince (Sebastian Shaw) asks if all the company is here, we have a few shots of the company eating, ignoring him, and that prompts Bottom’s first line. The men then crowd around Bottom (Paul Rogers) and Quince, leading Bottom to say, “Masters, spread yourselves.” This scene is done really well.

The fairy is played by a young girl, who splashes Puck (Ian Holm), leading to his first line. Puck makes a face when she says she serves the fairy queen. Both Puck and Fairy have some green face makeup. Puck is seated for their conversation, an interesting choice. Oberon and Titania’s approach is done with some strange, quick cuts, until they are face-to-face. Oberon (Ian Richardson) has horns. Titania’s “forgeries of jealousy” speech is presented in an interesting way, with cuts to her and Oberon in the day next to a body of water, and cuts to Titania (Judi Dench) elsewhere in daylight. After Titania’s last lines to Oberon, there are several shots of her young fairies disappearing. Then when Oberon calls Puck, Puck appears panting like a dog, and suddenly they are next to water in daylight. Once Puck has left, we are back in the woods at night, and Oberon delivers his lines to camera.

Several of the best lines are cut from the Demetrius/Helena scene. After Demetrius (Michael Jayston) says “follow me no more,” it goes right to Helena’s “I am your spaniel,” thus losing the great “Do I entice you” speech. Oberon is nicely framed by leaves and branches as he watches the scene. Then when Demetrius exits, Oberon is revealed there behind him – very nice. Puck returns, and it is day again for Oberon’s speech. There’s a great shot where Puck is eager to go put the flower on Demetrius’ eyes, but keeps stopping as Oberon adds more information. Puck’s speech when he finds Lysander is spoken to the camera. When Lysander awakes and sees Helena, it is clearly day.

(The DVD seems to have an error – there’s an odd cut of Lysander, and then he begins mid-line: “surfeit and my heresy.”)

I really like Sebastian Shaw as Quince, though oddly when Bottom calls for a calendar to check on the moon, Quince, without checking or even moving says, “Yes, it doth shine that night.” Is he teasing him, giving him what he wants to hear so they can get on with the rehearsal? Snout’s line “You can never bring in a wall” is said with a wonderful smile, like he’s realized some joke. A bit slow on the uptake is Snout. Bottom has a complete ass head, not just ears. Snout’s delivery of “O Bottom, thou art changed” is as he’s almost informing him, but not frightened. Judi Dench is excellent in the scene when she falls in love with Bottom. Scene I ends with a wide shot of Titania getting on top of Bottom, beginning to make love to him.

Puck’s delivery of “This is the woman; but not this the man” is wonderful. Hermia is filthy at this point, and pushes Demetrius into the brook. Lysander and Helena are also dirty when they appear. When Demetrius first awakes and professes his love for Helena, Helena is at first delighted, overjoyed. And then we can see her thoughts change as she perceives the sport. It’s a wonderful moment, and Diana Rigg is excellent. And Helen Mirren is absolutely wonderful when she arrives, running at Lysander and embracing him, not believing his unkind words at first. When Hermia goes after Helena, Helena climbs a small tree. The scene where Puck keeps Demetrius and Lysander from fighting is done really well and is quite funny.

Oberon and Titania’s reunion is done with several shots of them close to kissing. Day comes with a shot of hunting dogs barking. When Demetrius says that his love for Hermia has melted, we see Helena over his right shoulder, which is nice. On “long for it,” he looks at Helena.

There is another error in the DVD, with the beginning of Hermia’s line cut, so it begins with “parted eye.”

Bottom’s speech is delivered to camera in mostly closeup shots.

Act V begins at dusk. After Hippolyta’s line “But, howsoever, strange and admirable,” we go then back to Act IV Scene ii with the mechanicals. Then it goes back to Act V Scene I, with Theseus’ line “Come now, what masques…” Philostrate reads off the list of entertainments, rather than Theseus. Theseus’ great speech before the play’s prologue is cut. Bottom is great when talking to Wall. Lion speaks his lines quietly, fearfully. Thisby’s “Adieu, adieu, adieu” is spoken quickly, not dragged out to match Pyramus’ death. Theseus pays Quince before the dance. The bit with Puck’s broom is delightful.

Time: 118 minutes (though the DVD case says it’s 124 minutes – does that mean six minutes are missing?)
Posted by Michael Doherty at 5:52 PM