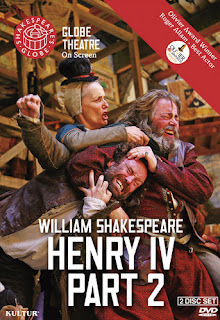 Henry IV Part 2 is a two-disc set containing a performance at the Globe Theatre starring Roger Allam, Jamie Parker, Oliver Cotton and William Gaunt. It was directed for the stage by Dominic Dromgoole and for the screen by Ross MacGibbon. As with Henry IV Part 1, it contains some fantastic performances, particularly by Allam as Falstaff and Cotton as King Henry.

In the Induction, Rumor is performed by several actors.

Northumberland is in black and carries a walking staff. He is quite good in the first scene, and you feel for him when he is trying to keep from hearing the bad news about his son. Morton too uses a walking stick. Northumberland tosses his upstage on “Hence, therefore, thou nice crutch.” After he falls, Travers recovers the staff for him. The second scene opens with a cheerful song for Falstaff as everyone enters. “‘Twas Falstaff who carried the day.” And Falstaff (Roger Allam) enters like a hero to his people, and adds some lines to the song himself. He is in his element, and is a delight to watch, having fun with the Chief Justice’s servant, and then with the Chief Justice himself. For “us that are young,” Falstaff stands behind the Page.

Act II
Fang and Snare are wonderfully over the top, and there is some physical comedy when they attempt to arrest Falstaff at Mistress Quickly’s behest. The Page has the line “Away you scullion! you rampallian! you fustilarian!” (following the Quarto rather than the Folio), his deeper, powerful voice surprising everyone momentarily. Mistress Quickly is great, particularly her deliver of “kiss me and ask to borrow thirty shillings,” adding just enough of a pause after “kiss me.” Hal (Jamie Parker) and Poins enter above. Hal uses a rope to hook a glass of small beer below. Lady Percy is quite angry and biting during her speech to Northumberland. The fourth scene begins with a brief song. When Doll (Jade Williams) enters, she runs forward downstage and vomits. Are we to believe she is truly pregnant? No, it due to drink. Oh, it looks like she might have caught a few audience members with her vomit. After Falstaff’s entrance, he urinates into a jar. Falstaff delivers Quickly’s line “Sick of a calm,” as well as his line that follows it. Quickly then scrubs up Doll’s vomit. Doll clearly doesn’t mean it when she says “nobody cares,” for she throws herself into Falstaff’s arms. Pistol enters with a rowdy, raunchy force. Doll is great here. After “my fair Calipolis,” Pistol kisses Mistress Quickly. Hal enters and stands behind Falstaff when Doll asks, “Sirrah, what humour’s the prince of?” Falstaff is excellent when coming up with his explanation to Hal.

King Henry (Oliver Cotton) has to wake the Page to give him the letters. And on Henry’s “Make good speed,” the Page rushes off. Warrick is also in bedclothes when he enters. Shallow (William Gaunt) and Silence are sweetly doddering old men, and their recollections have a sweet humor. When Bardolph asks which is Justice Shallow, Shallow looks to Silence for the answer. Silence points at him, causing him to remember. Shallow adds an “O” at the beginning of his answer: “O, I am Robert Shallow.” After Shallow asks “Where’s the roll,” he discovers it in his own hands, leading to his “Let me see.” Shallow is absolutely wonderful.

Prince John certainly has attitude when speaking with the Archbishop, and so it seems that the Archbishop and the others should be more suspicious when he suddenly switches to say he likes their articles. Westmoreland unsheathes Hastings’ own sword to use against him when pronouncing his arrest. While Falstaff questions and challenges Colevile, a war drum is played. After Colevile yields, Falstaff sighs in relief. There is a nice moment between Colevile and Falstaff after Prince John says the former is to be executed. Falstaff smells Bardolph before seeing him. King Henry is excellent when asking about Hal, and when he begins to suffer from his illness, holding his belly in pain. He is then led to a bed, which is wheeled in centerstage. When he sleeps, his head is turned to the crown beside him. Henry is also fantastic in the scene with Hal.

It is nice to see another side of the Chief Justice when he hears that King Henry has died. We see some change in Hal as the Chief Justice states his case. Falstaff’s deliver of “I pray thee then, deliver them like a man of this world” is great. Falstaff shouts his lines joyously, “the laws of England are at my commandment.” It is pretty clear that it is a cushion in Doll’s clothes, that the First Beadle is correct and she is not pregnant. The look of shock on Falstaff’s face when Hal denies knowing him is heartbreaking. Then when Hal falls back into his teasing momentarily, Falstaff picks up on it immediately and begins to laugh until Hal quickly stops him. Falstaff seems almost broken when he tells Shallow he owes him a thousand pounds. The epilogue is cut. The company engages in a dance at the end.

There in one intermission, coming at the end of Act III, and that is when viewers must switch to the second disc.
Posted by Michael Doherty at 1:36 AM