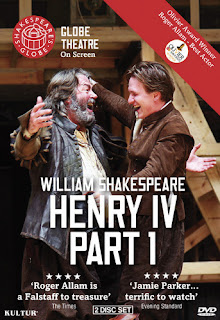 Henry IV Part 1 is a two-disc set of a performance at the Globe Theatre starring Jamie Parker, Roger Allam, Oliver Cotton and Sam Crane. This performance, by the way, was also screened in movie theaters in the U.S. on August 1, 2011. The production was directed for the stage by Dominic Dromgoole, and directed for the screen by Robin Lough, and it features some absolutely wonderful performances.

King Henry (Oliver Cotton) is strong at the beginning, which is great. He only sits on his throne during Westmoreland’s first speech. However, when delivering the line “Of Murray, Angus, and Menteith,” he struggles to recall the last name, leading Blunt to provide it to him (something not in the text).

Prince Hal (Jamie Parker) enters from the trap, following a prostitute, to whom he tosses a coin. His pants are at his ankles. Falstaff (Roger Allam) is in bed, and he gargles with his drink. This Hal is clearly not looking forward to ruling, at least not yet, for when Falstaff says “when thou art king,” he shows disinterest, even exasperation, at the thought and lies back down on the stage. Falstaff takes great joy in his own speech, stressing his joke “were it not here apparent that thou art heir-apparent.” Poins has an air of excitement about him, and he takes much delight in telling Hal the exploit he has planned. Hal’s “I knew you all” is delivered to the back of the stage as Poins makes his exit there. Worcester (William Gaunt) uses a walking stick and exits through the audience. King Henry gets furious with Hotspur (Sam Crane) here, leading to a fit of coughing, a nice touch. That leads to Hotspur getting all hot, and he is delightfully mad when he has the idea of training a starling to say nothing but “Mortimer.” Northumberland’s reactions to Hotspur’s raging are wonderful.

The second act begins with a brief song delivered by Gadshill, who then exits before the carriers enter. Falstaff enters from within the audience. After his “break my wind” line, he further indicates the fart joke by using his clothes to fan his ass. The others make bird sounds, and Falstaff attempts to respond in kind with a whistle, but – failing that – simply shouts, a funny moment. As Kate Percy does her speech, she begins to berate Hotspur, who himself is for once still, creating an interesting dynamic. And his expression is serious, until he finds a way of diverting his own attention elsewhere.

The bit between Hal and Francis is great and hilarious. Hal is a delight throughout this scene, taking wonderful joy in his fun. And of course Falstaff is wonderful as he tells his tale of being robbed. And the interaction between them is perfect. Falstaff pauses before offering his new explanation, “I knew ye as well as he that made ye,” which makes it all the more funny. He is at his most honest when he exclaims, “I am glad you have the money.” And they all join in a song and dance. On Falstaff’s “Convey my tristful queen,” two others pull Mistress Quickly aside. Falstaff’s speech is delightful, particularly when speaking of himself. He then takes great joy in acting as the Prince, pretending to do much of what we’ve already seen Hal do. There is an interesting moment when Hal turns serious, but can’t maintain it long, soon laughing once again at Falstaff. It is then that we see both a hint of what is to come, and the love Hal has for Falstaff.

The third act also begins with a short song, this one delivered by Glendower. Then his bragging is quite funny. Also funny is Hotspur’s reaction when Glendower says his daughter will sing a song. I love the strong moment where King Henry puts a sudden halt to Hal’s speech, taking Hal out of his element. After Hal’s “I will tear the reckoning from my heart,” he and King Henry embrace, a surprising and touching moment. They are as surprised by it as we are, it seems.

Hal enters playing the pipe, leading Falstaff and Bardolph in a short march. Quickly’s husband is above, a silent watchful man, and references to him are met with laughter from the audience.

Act IV begins with a song, this one with a war-like beat. Hotspur’s energy now contains a certain nervousness, which is wonderful. Falstaff is now decked out in some armor – a breastplate and helmet. But he also carries food and drink, bringing something of his world of leisure with him. Blunt enters through the audience. Hotspur holds out his hand to him, but Blunt does not clasp it.

No song begins this act, but rather King Henry, Prince Hal and the others enter with purpose from upstage. Worcester enters through the audience. There is a nice moment when King Henry turns down Hal’s offer of one-on-one combat with Hotspur as means of solving the dispute. After “Honor pricks me on,” Falstaff turns to follow Hal and the others, then turns back to the audience to deliver the rest of his famous speech.

It is interesting to me, as always, that while Worcester lies about King Henry’s answer, he offers a nugget of truth about Prince Hal’s offer to Hotspur. Though it is Vernon, of course, who speaks of Hal’s demeanor. Blunt wears a black cloth covering the lower part of his face, to help Douglas mistake him for the king. Falstaff seems to suffer a wound in his fight with Douglas, and so seems to fall as much as at the sight of his own blood as from his decision to counterfeit death to save his own life. But then we see he has faked the wound as well. That’s wonderful. Falstaff struggles to lift Hotspur. Bardolph enters to help lift him at the end of the scene. After King Henry’s final line, the flag bearing the crest is raised, and the company engages in a dance.

There is one intermission during the performance, coming after Act III Scene ii, and it is then that viewers much switch to the second disc. This DVD was released on July 3, 2012.
Posted by Michael Doherty at 4:12 PM