Shakespeare References in Gods And Spacemen Of The Ancient Past 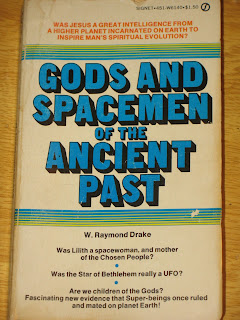 In Gods And Spacemen Of The Ancient Past, author W. Raymond Drake makes the argument that the “Lord” and angels of the biblical stories were actually extraterrestrials. It is an interesting argument – at times even compelling – but it is also rather goofy, and the book becomes repetitive. Still, it contains a few references to Shakespeare. Drake writes: “The Old and New Testaments generally describe heaven as a place evocative perhaps of another planet, especially the fantastic description by St. John in Revelations, who seemed to be depicting some advanced world transcending his understanding, like (say) Shakespeare with all his wondrous imagery trying to comprehend our technical civilization today, although mystics will assert that Revelations portrays a state of ecstasy strangely similar to those ultravivid hallucinations of ‘Hippies’ today” (pages 39-40). (Yeah, the book came out in 1974.)

Then much later in the book, Drake mentions Shakespeare again: “David poured forth his devotion to the ‘Lord’ in many wonderful Psalms, which evoke those passionate sonnets of Shakespeare” (p. 140). And then, just a little bit after that, he writes: “Even the supreme genius of Shakespeare could not pen such erotic love poems to a formless, spiritual Ideal. Scholars agree the Bard was inspired by that wanton Dark Lady whose lyrical beauty haunts each bejeweled verse. David many centuries earlier must have written his Psalms to a ‘Lord’ of Wonder, an Extraterrestrial whom he surely heard and saw, described in simple words curiously akin to our own Science Fiction” (p. 140. Unusual use of capital letters, eh?

Gods And Spacemen Of The Ancient Past was first published in November of 1974.
Posted by Michael Doherty at 9:09 PM