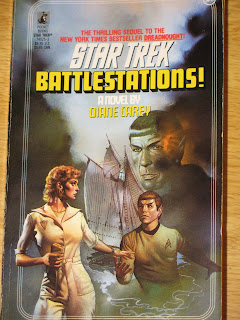 Lots of Shakespeare references have appeared in episodes of the various Star Trek television series and films (one of the films is even named after a phrase from Hamlet), so it came as no surprise to find a Shakespeare reference in Diane Carey’s novel, Star Trek: Battlestations! Carey writes: “He puzzled for a moment, then held up a finger. ‘Oh. You mean like if you fire an infinite number of shots at an infinite number of monkeys…’ ‘You’ll eventually kill Shakespeare’” (p. 60). That is a joke on the theory that if a monkey randomly pressed keys on a typewriter for infinity it would eventually produce Hamlet.

Star Trek: Battlestations! was published in 1986.
Posted by Michael Doherty at 7:47 PM