Shakespeare References in The Mummy Or Ramses The Damned 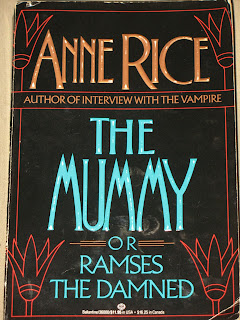 The next is a reference to a statue of Shakespeare: “Westminster Abbey. They walked together under the high arches. Such splendor. She showed him the cenotaph of Shakespeare” (p. 116). (It is interesting to me that this book contains two different spellings of the word “splendor.”) And then we go back to Antony And Cleopatra: “The greatest men of the time paid court to her. Hers was a royal soul in every sense of the word. Why do you think your Shakespeare wrote about her?” (p. 189). This novel also contains a reference to Macbeth. After Alex, concerned for his father, says he’s going to call the doctor, Elliott says: “Would Lady Macbeth have benefited from a doctor? I don’t think a doctor would have helped her” (p. 301).

The Mummy Or Ramses The Damned was published in 1989. The copy I read says “First Edition,” but it is a large trade paperback, so clearly is not a first edition.
Posted by Michael Doherty at 10:25 PM