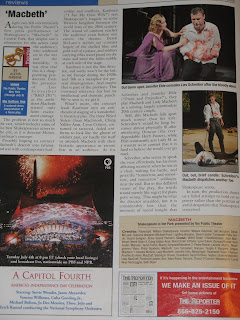 My apartment is tiny, and yet I keep finding things I had forgotten about, things that I no longer need. Such as a box of magazines. But as I was glancing through them, a couple of Shakespeare references jumped out at me. In the January 1999 issue of Screen Actor, there is an article titled “To Dub or Not to Dub…” which is obviously a reference to Hamlet’s famous soliloquy. The June 29, 2006 edition of The Hollywood Reporter contains a review of a production of Macbeth starring Live Schreiber in the title role. The writer didn’t care much for the production.

The Winter issue of Oregon Quarterly includes a piece on actor and writer Heidi Schreck which contains mention of a Shakespeare play: “Schreck performed in many productions including As You Like It, The Troubles, Springtime, The Bacchae, and Anton Chekov’s Three Sisters, which Schmore directed” (p. 50). That same article contains this: “‘Jeff and I would talk to Frog on our way to acting Shakespeare together,’ Schreck recalls” (p. 50). The Frog in question is a guy that would stand just outside of the University of Oregon campus, selling joke books. I still have a couple of his books. I took a course titled Acting Shakespeare at the University of Oregon, and assume that is what Schreck is speaking of here, and so the writer of the piece should have capitalized the A in “acting.” The Summer 2018 issue of Oregon Quarterly also contains a Shakespeare reference. It is in a piece titled “Icarus Rising,” which is an interview with Jake Swantko, Swantko says, about Grigory Rodchenkov: “He was always lecturing you about food or fine whiskey or his favorite musicians of 1970s Russia, or all these philosophers. He would recite Hamlet to us” (p. 52). Then in the current issue of Westways (November/December 2018), in an article on Peru, one of the sections is subtitled “Into Thinner Air,” a reference to Prospero’s lines in The Tempest, “These are actors/As I foretold you, were all spirits and/Are melted into air, into thin air.”

Posted by Michael Doherty at 10:34 PM