Shakespeare References in The Disappearance Of Childhood 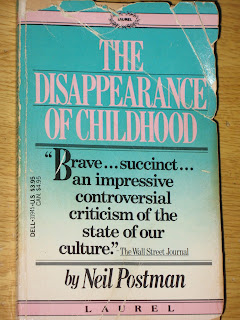 Neil Postman’s The Disappearance Of Childhood, a book on the development and decline of the concept of childhood, contain several Shakespeare references. The first is to Julius Caesar, and is in the first chapter. Postman writes, “Historians usually come not to praise but to bury” (p. 5), obviously referring to a line near the beginning of Antony’s famous speech, “I come to bury Caesar, not to praise him.” Then in the third chapter, Postman writes: “Shakespeare attended a grammar school in Stratford, and his experience there inspired him to express a famous complaint (for he had probably been required to read Lyly’s Latin Grammar)” (p. 40). Postman than goes on to quote a passage from The Second Part Of King Henry The Sixth: “Thou hast most traitorously corrupted the youth of the realm in erecting a grammar-school…. It will be proved to thy face that thou hast men about thee that usually talk of a noun, and a verb, and such abominable words as no Christian ear can endure to hear” (p. 40). Those lines are part of a longer speech by Cade in Act IV. Postman continues, “But most Englishmen did not agree with Shakespeare that the creation of schools corrupted the youth of the realm” (p. 40). A little later in that same chapter, Postman writes: “Of course, children have never found such a regimen to their liking, and as early as 1597, Shakespeare was able to provide us with a poignant and unforgettable image of the child who knows that school is the crucible of adulthood. In the famous ‘ages of man’ passage in As You Like It, Shakespeare speaks of ‘the whining schoolboy, with his satchel/And shining morning face , creeping like snail/Unwillingly to school’” (p. 47). This book also contains a reference to Hamlet. In a passage in which he recounts some of the subjects that children hear about on television, Postman writes: “From hemorrhoids to the heartbreak of psoriasis, from neuritis and neuralgia to headaches and backaches, from arthritis to heart disease, from cancer to false teeth, from skin blemish to bad eyesight, there were forty-three references to the shocks our flesh is heir to” (p. 96). Those last words are a reference to Hamlet’s most famous soliloquy, in which he says “and by a sleep to say we end/The heartache and the thousand natural shocks/That flesh is heir to.”

The Disappearance Of Childhood was published in 1982. The first Laurel printing was in April of 1984.
Posted by Michael Doherty at 6:54 PM