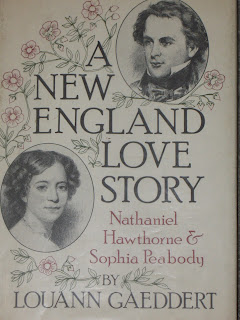 A New England Love Story: Nathaniel Hawthorne And Sophia Peabody, by LouAnn Gaeddert, contains a few Shakespeare references. About Nathaniel Hawthorne in his childhood, Gaeddert writes: “Of course he could not understand all of what he read, but he discovered stories and sentences that appealed to him. Shakespeare’s Richard III contained one line that he entoned dramatically to himself and to anyone within earshot: ‘My Lord, stand back and let the coffin pass’” (p. 15). About Nathaniel’s sister, Gaeddert writes, “Ebe had shown great promise as a child; she could read Shakespeare at the age of six” (p. 23). The final Shakespeare reference is simply to the title of Measure For Measure: “Later he recorded an idea for a story she had given him and then this item: ‘There is no Measure for Measure in my affections. If the Earth fails me in love, I can die and go to GOD.’ – S.A.P.’” (p. 75).

A New England Love Story: Nathaniel Hawthorne And Sophia Peabody was published in 1980 by The Dial Press.
Posted by Michael Doherty at 2:04 PM