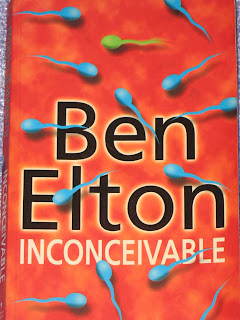 I only got to page twelve of Ben Elton’s novel Inconceivable before coming across the first Shakespeare reference. It was a humorous reference to Hamlet: “But when is the time right? To have it off or not to have it off, that is the question” (p. 12). The book is about a couple trying to have a child, and trying different methods. It is told from both the man and the woman’s perspective, and it seems both characters are Shakespeare fans. That first reference is from the woman’s perspective, as is the second, which is also a Hamlet reference. “I mean it probably is self-indulgent claptrap, of course, but he doesn’t have to be so negative all the time. I said to him, ‘There are more things in heaven and earth than are dreamt of in your philosophy, you cynical bastard!’ which I must say I thought rather a clever riposte” (p. 30). That, of course, is a reference to Hamlet’s line to Horatio. The next reference is from the man’s perspective, and is a reference to Much Ado About Nothing: “It compared Dodd to a Shakespearean clown. They did a bit of Dogberry and Verges from Much Ado to illustrate the point” (p. 78).

There are several references to Macbeth in this novel. The first is from the woman’s perspective: “He’s a set designer for the theatre (mainly fringe; he told me that recently he had to do Burnham Wood moving to Dunsinane for about five quid: ‘We used a lot of real twigs, and binliners, of course, can represent just about anything’)” (p. 90). The second Macbeth reference is from the male character, while he talks about his sperm: “The first bit is the best bit, of that there seems to be no doubt. All the rest is rubbish, full of sound and fury, signifying nothing” (p. 179). The next Macbeth reference is also from the man’s perspective, though the man is quoting another character: “I like romantic comedy with edge, with bite, with bollocks! To me Macbeth is a romantic comedy, so’s Oedipus” (p. 192). The next is from the woman’s perspective: “Anyway, the deed had to be done” (p. 219). That refers to Macbeth’s line “I have done the deed.”

There are also a few references to Othello. The woman tells us, “Oh well, before we knew it the Green-Eyed Monster which doth mock the meat it feeds on would be knocking at the door, suitcase in hand and planning a long stay” (p. 194). That refers directly to Iago’s speech to Othello: “O beware, my lord, of jealousy!/It is the green-ey’d monster which doth mock/The meat it feeds on.” The next is from the man’s perspective, regarding another character: “She said she did not do two Desdemonas and a Rosalind at the RSC in order to have her bum used to sell videos” (p. 245). (That line also contains a reference to As You Like It.) The last is from the man’s perspective: “Jealous as Othello though I may have been, I knew that I wished Lucy all the happiness she desired” (p. 269).

There are also some references to Shakespeare himself and to the Royal Shakespeare Company. The male character writes: “Nimnh is not as big a star as Carl but she’s very highly regarded, having played most of the younger Shakespeare totty at the RSC” (p. 231). The next is from the woman’s perspective, regarding the same characters: “The other was a woman I recognized as Nimnh Tubbs from the RSC” (p. 252). The last is also from the female character: “In fact I did say that to him quite recently and he told me that in fact it has been scientifically proven that the amount of adrenalin released into the body when an actor tackles a lead Shakespearean role is equivalent to that experienced by the victim of a car crash” (p. 264).

Inconceivable was published in 1999.

Posted by Michael Doherty at 6:23 PM