Shakespeare References in The Glass Menagerie 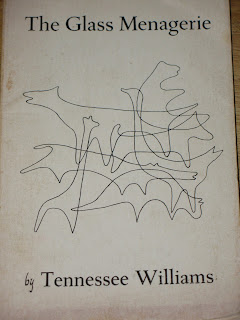 Tennessee Williams’ play The Glass Menagerie contains several references to Shakespeare. Most of them come because Jim, the gentleman caller, refers to Tom as Shakespeare because of Tom’s interest in writing poetry. In Tom’s monologue at the beginning of the sixth scene, he explains that: “He knew of my secret practice of retiring to a cabinet of the washroom to work on poems when business was slack in the warehouse. He called me Shakespeare” (p. 68). A little later in the same speech, Tom says: “If he did remember Laura, it was not as my sister, for when I asked him to dinner, he grinned and said, ‘You know, Shakespeare, I never thought of you as having folks!’” (p. 69). And when Jim meets Laura, he says, “I didn’t know that Shakespeare had a sister!” (p. 76). A little later Jim says to Tom, “You know, Shakespeare – I’m going to sell you a bill of goods!” (p. 77). After the lights go out, Jim says to Amanda, “Shakespeare probably wrote a poem on that light bill, Mrs. Wingfield” (p. 87). When Jim remembers that he did know Laura in high school, he says: “I didn’t connect you with high school somehow or other. But that’s where it was; it was high school. I didn’t even know you were Shakespeare’s sister” (p. 91). And when Jim leaves, he says, “So long, Shakespeare!” (p. 112).

There is also a reference to Romeo And Juliet. Jim reveals he’s engaged and says that he hasn’t told the people at the warehouse yet. He adds: “You know how they are. They call you Romeo and stuff like that” (p. 111).

The Glass Menagerie was originally published in 1945. The edition I read is the New Classics edition, which was first published in 1949, then reset in 1970. The copy I read was from the fifteenth printing.
Posted by Michael Doherty at 3:13 PM