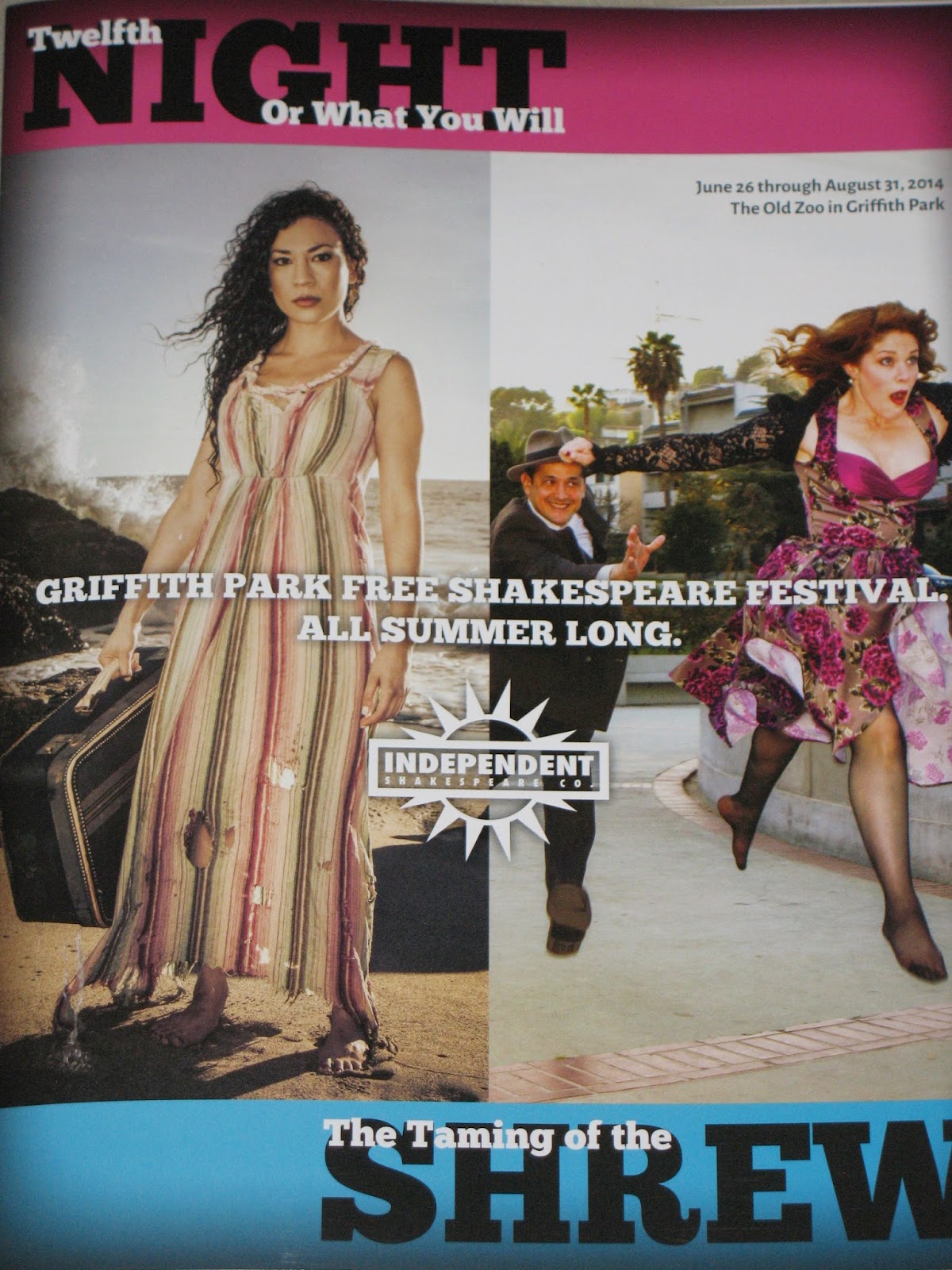 I always look forward to seeing productions by the Independent Shakespeare Company, to seeing what they’ll bring to each play. And I had an absolutely wonderful time at their Thursday, August 21st performance of The Taming Of The Shrew.

I was a little sad to find that they cut the Induction. I know that those first two scenes are almost always cut, but their exclusion certainly changes the tone of the play itself. And I thought that this company (if anybody) might actually keep those scenes in. That being said, the group was quickly off and running, and any disappointment at that cut was soon gone.

Tranio and Lucentio enter through the audience at the start of the play. This company always makes great use of the outdoor park setting, and of the audience itself. At one point, Lucentio and Bianca go into the audience to make out (which they actually did on my blanket – it’s always good to be in the front). And later, Katherine, hungry, comes out into the audience, desperate for food, and angry when none is offered to her.

Music plays a role in this production, with a pianist/accordion-player and a singer as an important presence on stage (the singer later becomes the Widow). And when we first meet Hortensio, he is wooing Bianca with a song (accompanied by the man on accordion).

There is certainly a lot of physical humor in this production, and quite a bit of silly business, as when Lucentio and Tranio exchange clothes. Later, when Lucentio gives Bianca a lesson, they blow soap bubbles. Most of the silliness works, the only exception being that whenever Petruchio mentions his deceased father, everyone on stage crosses himself (it gets a laugh, but is certainly one of the weaker jokes).

This production uses somewhat modern dress, like early twentieth century, with Tranio carrying a camera in his first scene. Lucentio is in a yellow suit and hat with a pink shirt. When Lucentio is disguised as a scholar, he wears a black graduation gown and glasses, and of course carries a stack of books. Likewise, when Hortensio enters disguised, he wears a graduation robe (along with a fake moustache). And at one point, Bianca and Lucentio wear roller skates. Grumio’s clown-like attributes are stressed in this production, and he wears red pants and a jacket with patches on the elbows. Petruchio himself seems fairly well off judging by his suit.

While Petruchio boasts, “Have I not in my time heard lions roar,” Grumio (Richard Azurdia) imitates a lion. And he goes on to imitate the wind and so on. Petruchio is so delighted with himself, getting a bit carried away, and it’s a wonderful moment. The entire cast is fairly strong, and everyone has moments in which he or she shines. I love Hortensio’s spot-on delivery when he tells Petruchio about Katherine’s only fault. And Tranio is hilarious when he enters disguised as Lucentio, greatly exaggerating his state. And as the play goes on, he gets more and more into his role as Lucentio and is absolutely delightful. André Martin turns in an excellent performance as Tranio, as does Sean Pritchett as Lucentio.

But the best performances are by the production’s two leads – Luis Galindo as Petruchio, and Melissa Chalsma as Katherine. Katherine has a flask in her garter when we first see her. She wears a red dress with a black lace top over it, showing her vibrant and fiery personality. She is clearly jealous of the gifts Bianca receives, as it one such gift which leads her to bind Bianca at the beginning of Act II (we see her bind Bianca, rather than Bianca entering already bound).

Bianca proves to be feisty too, fighting back while tied to the chair. But then when Baptista enters, she quickly changes her disposition and starts crying to elicit his sympathy and help. This is a wonderful touch, because it hints at the play’s ending. Erika Soto does a great job of making Bianca a more complete character. And I like that Bianca is clearly attracted to the disguised Lucentio. I also love Bianca’s reading of “The taming-school! what, is there such a place?” Her delivery indicates a certain amount of worry that it exists, that it might be something she herself will have to go through.

I was glad to see a variation on the broken lute. The lute in this case is a guitar, and when Hortensio says, “she hath broke the lute to me,” he holds up the guitar to show a large hole in it, rather than entering with it on his head. And Petruchio’s reaction is wonderful.

There is an excellent moment when Katherine and Petruchio first meet, sizing each other up silently. Petruchio’s compliment “Yet not so deeply as to thee belongs” is delivered honestly, and as such it clearly affects Katherine, which is nice. (This production does a really good and careful job of building their relationship, their attraction to each other.) She does go to strike him a second time, and he grabs her wrist to stop her. Petruchio then holds Katherine over his lap, and after “passing gentle,” he spanks her. I love Katherine’s delivery of “Call you me daughter…wed to one half lunatic.” Katherine throws things at Petruchio and dumps water on him from a watering can, which he delightfully ignores, throwing her into even more of a rage. It’s a fantastic scene, and the cast really shines.

Baptista keeps notes as Gremio lists off what he has to offer Bianca. When Gremio says, “And may not young men die as well as old,” he casually pulls out a knife and pares his nails. I love this, because it indicates there is still life and still a fight in the older man, which is necessary for him to believe he has any chance at all with the young Bianca. Gremio’s line “Petruchio is Kated” is delivered as a joke, which falls flat with the other characters on stage – a nice touch.

For the wedding scene, Petruchio enters from within the audience. Grumio plays his horse, stealing the coconuts bit from Monty Python And The Holy Grail. Petruchio enters in a black coat with patches on the elbows (drawing parallels to Grumio’s clown-like quality), a black top hat and red bow tie. And on “thus I’ll visit her,” he removes his jacket and shirt. And then on “even thus,” he takes off his pants, revealing some sort of jungle attire. And when he turns about, he elicits a huge laugh from the audience (you'll just have to see it). After the wedding, Grumio wears a “Just Married” sign and tin cans when he enters, followed by Petruchio and Katherine. Petruchio puts Katherine on Grumio’s back. He then returns with a giant whip (the first use of it in this production). I know it’s expected, but I was just a bit disappointed when it appeared. But it’s used very sparingly in this production.

The dialogue between Grumio and Curtis in Act III Scene iii is done with Grumio grunting and making other noises to answer Curtis’ questions regarding Katherine. Katherine then enters in disarray, followed by Petruchio with the giant whip. As usual, the Haberdasher is cut, and the Tailor presents both the hat and the dress. I love Katherine’s pointed and precise delivery of “Love me or love me not, I like the hat.” This production does a good job of finding moments of shared joy between Katherine and Petruchio, as when they both laugh toward the end of the Tailor’s scene. And it is very clear when Katherine catches on to the game. When Katherine says to Vincentio, “bedazzled with the sun,” she looks at Petruchio as she stresses “the sun.” And her big speech at the end (one that is rather difficult in modern times) is handled really well.

There is one twenty-minute intermission, coming at the end of Act III Scene ii. This production of The Taming Of The Shrew was directed by David Melville. There are a few more opportunities to see this play before the season ends. Visit the company’s website for the schedule.

By the way, the company has shirts for sale. Here is what the front looks like: 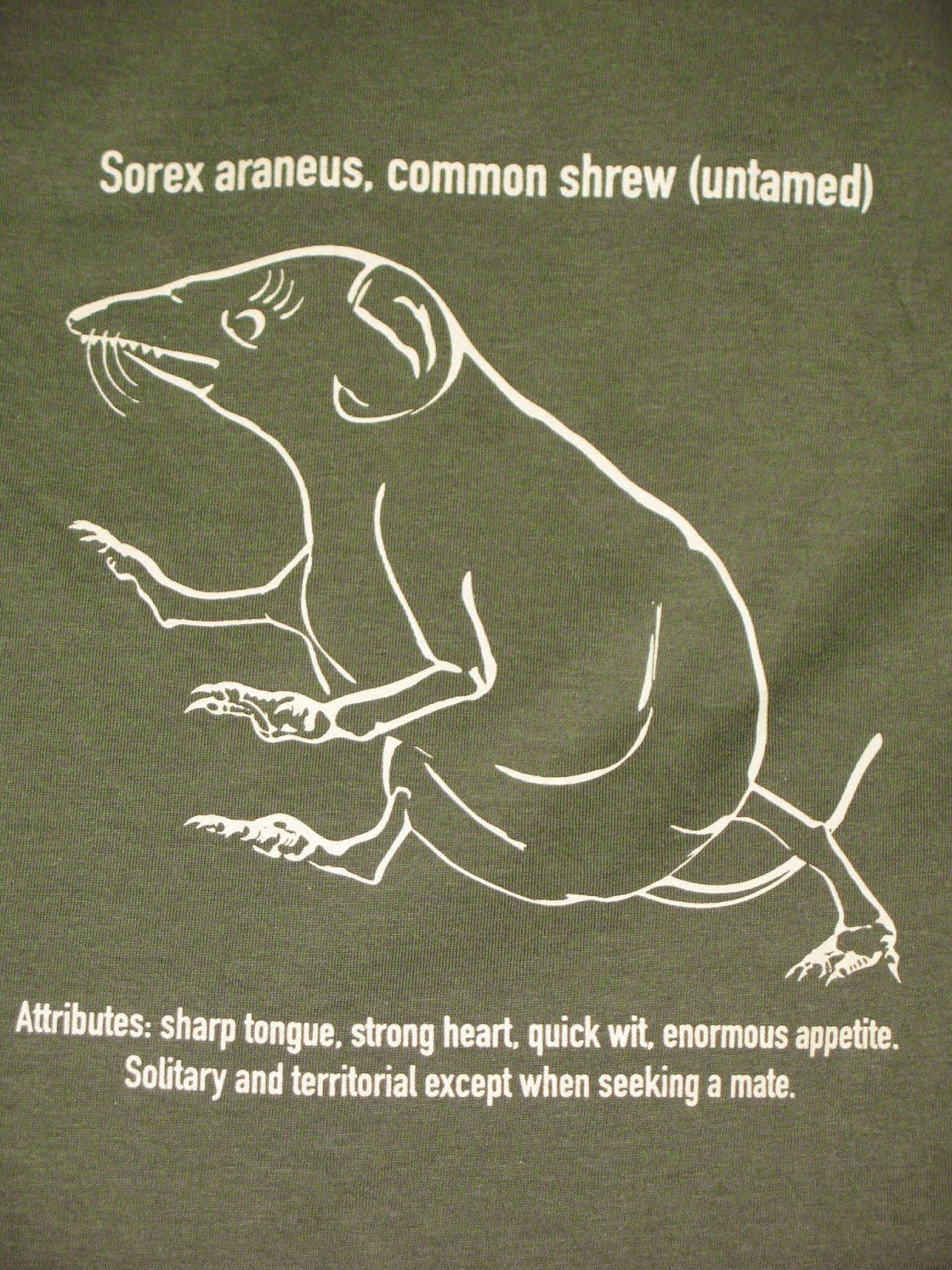 Posted by Michael Doherty at 11:16 AM