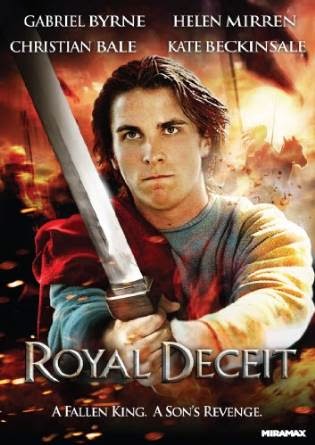 Royal Deceit  (1994) stars Gabriel Byrne, Helen Mirren, Christian Bale, Brian Cox, Steven Waddington, Kate Beckinsale and Tom Wilkinson. The screenplay is by Gabriel Axel and Erik Kjersgaard. The film was directed by Gabriel Axel. Royal Deceit is actually not a Hamlet adaptation, but rather is based on Shakespeare’s source material for the play. An opening credit states, “Based on the Chronicle of Saxo Grammaticus.” Much of the story is the same, but it pales greatly in comparison to Shakespeare’s work. This film shows just how much Shakespeare brought to existing material. In short, it’s a terrible film, in spite of an excellent cast.

The film suffers from a lot of poorly written and unnecessary narration. It opens with narration about the tiny kingdom. “The peace of Jutland was shattered by the murder of the king and his eldest son.” We learn that King Hardvendel was supposedly attacked while on a hunting trip, and that only the king’s brother survived.  So much is told in voice over at the beginning. For example: “It seemed that upon hearing of his father’s death, Amled had gone mad. But Amled had only assumed the disguise of madness. For his father’s ghost had come to him demanding vengeance on his murderer, who still lived.” That’s right: Instead of filming a ghost sequence, this film decides to just tell us about it. In fact, we never see the ghost in this film.

Fenge (Gabriel Byrne), the king’s brother, tells Geruth (Helen Mirren), the king’s wife, the story of the king’s death. “I blame myself,” he says. Indeed. She dresses the wound which we just moments ago saw one of his men inflict upon him at his command. And so we see how Fenge woos and seduces Geruth, which is interesting. We also see the king’s funeral. At the funeral, Fenge says Amled cannot be king until he regains his senses, and asks the crowd who they think should be king. (Of course, it brings up an interesting point. If Amled had not bothered to feign madness, then he would have automatically become king in this story. So Fenge’s murder of the king and the king’s eldest son would have been for naught. So, in fact, Amled’s mad plan only worked to help Fenge attain his desired goals.)

The film then goes to a flashback to Fenge talking with his men, saying: “What does my brother have that I don’t have? He’s just older than I am.” The flashback continues with Fenge leading the men to kill the king by hanging him.

When we return to the funeral, those very men call for Fenge to be king. Fenge then announces that Geruth will be his wife. It must be a very small kingdom, for only a handful of peasants have gathered for the king’s funeral. It feels like a tiny village, hardly anything worth killing to become king of.

After Amled (Christian Bale) shouts that someone has stolen the king’s crown, Ribold (Steven Waddington), one of Fenge’s men, asks Fenge if Amled is faking madness. Fenge isn’t sure, and isn’t sure how to find out. Ribold suggests sending a woman to him. Obviously, Ribold is sort of the Polonius figure, and the woman they send to Amled is a hint of the Ophelia character. First we have to see Amled getting onto a horse backwards as part of his mad act. (Really? Ugh.)

Well, Amled ends up having sex with the girl (why not?). Afterwards he asks her straight out if Fenge had told her to make him love her. And she nods her head yes. This is such a dull way to do this. In the play, Hamlet comes to distrust Ophelia, but never asks her straight out if she’s talking with him at the behest of Claudius. Anyway, this girl promises not to tell Fenge anything, but Amled tells her to tell him he “barked like a dog and crowed like a rooster.” Would anyone fall for Amled’s pathetic attempt at madness?

So then Ribold suggests leaving Amled alone with his mother, and spying on the conversation. Voice over then tells us, “Fenge had no doubt that Amled knew him to be Hardvendel’s murderer.” Geez, the film couldn’t show us that through Byrne’s performance? The voice over also alerts us to Fenge’s decision to kill Amled. Why show us anything at all at this point? Anyway, Ribold hides to hear the conversation between Amled and Geruth, but in this version Geruth is unaware. Somehow Amled immediately senses that Ribold is hiding in the room and stabs him (but at no point thinks it is Fenge).

Each scene is so much poorer than the corresponding scene in the play that I have to wonder why they wanted to film this in the first place. Watching Helen Mirren in the closet scene made me wish they had just decided to do Hamlet, for she (as always) is wonderful, but could be doing so much more. In this version, Geruth promises Hamlet that Fenge will not enter her bed again, something not in the play. Everything is so easy in this version. Everything is black and white. The characters are barely outlines of themselves.

We have the scene where Fenge asks Amled where Ribold is, but unlike the play, in this version Geruth has not told Fenge that Amled has killed Ribold. So why is he asking Amled this question at all? Like every other scene, this is a poor substitute for the scene in Shakespeare’s work. Amled says, “I suppose he’s with the pigs.” (Earlier we saw him dump the body in with the pigs.)

Fenge decides to send Amled to England, as in the play. He assigns two men to accompany Amled. But they have no prior relationship to him, as Rosencrantz and Guildenstern do in the play, so why would Amled ever trust them? And why would Fenge think he would? Amled then tells his plan to Geruth, including that word of his death will come, to make sure that there is no little bit of suspense in this film.

We see Amled on the boat, reading the message that Fenge has sent to the Duke. But it’s a carving on wood, which makes it a bit silly, especially as Amled begins to change the message. Pointless narration tells us, “The message his uncle had sent to the Duke of Lindsey was the proof that Amled had so long sought of his uncle’s guilt.” Yeah, no shit. The voice over continues: “All Amled’s doubts and conflicts were laid to rest. There was to be from this point on no impediment to his quest for justice and the avenging of his father’s and brother’s murders.” (Compare that to Hamlet’s “O, from this time forth,/My thoughts be bloody, or be nothing worth!”) And there are still thirty-eight minutes left to the film.

For some reason, we have to watch the two men deliver the message. The only good thing about this is that it provides us a scene with Brian Cox, who plays the Duke. But the wood carving message is just too silly. Amled catches the eye of the Duke’s daughter, Ethel (Kate Beckinsale). And we have a pointless scene of Amled asking the Duke about his companions, and the Duke explaining he had to hang them, as per the wishes of Amled’s uncle. There’s an odd bit where Amled gets money from the Duke, demanding more than the Duke offers. And then there’s a bit with Amled out riding a horse, and voice over telling us what we can see him doing. And then there is perhaps the worst battle scene ever to appear in a film (with what looks like small paper cut-outs of soldiers in the background – seriously, look at the lower right corner of the screen - it's hilarious) as a neighboring tribe attacks the Duke’s men.

The film spends quite a lot of time in England. And the narration becomes more and more annoying, telling us the Duke is wounded just as we see that the Duke is wounded. And then Amled gives one of those cliché rousing speeches to the remaining men. There is a terrible fight scene between Amled and the leader of that other tribe. That leader dies immediately from one small knife wound. He doesn’t even have time to bleed. By the way, there is some terrible looping in this scene, including someone shouting, “Take it easy!” Then we have another pointless shot of the other tribe disarming. It just goes on and on. The film is only eighty-five minutes, and it spends twenty-three of those in England, away from the story.

Finally, with only fifteen minutes remaining, Amled returns to Denmark with his new bride, Ethel. The scene where he returns and faces Fenge is shockingly dull. And after Fenge and most of the others leave, Fenge’s men stay behind with Amled, drinking. It makes no sense. And making even less sense is that after these men have passed out, Amled doesn’t just quickly dispatch them, but rather rolls each man up in a tapestry and then sets fire to the place. What the fuck? And the tapestry bit was part of his plan all along, for he told Geruth something about them before he left for England. Lighting a fire is such a bad idea, for it puts innocent people at risk. The town’s people have to rescue horses from the nearby stables and so on. Plus, the building will then have to be rebuilt. Just stab the fuckers, Amled, you moron! Oh well.

Anyway, Amled and Fenge have a very brief fight, which Amled wins. So this version has a happy ending, with Amled alive and married and now king, and his mom alive as well.

This film is worthwhile perhaps in as much as it shows us just what a tremendous talent Shakespeare was. For when you remove Shakespeare from a story, what you have left is hardly anything at all.

The DVD has no special features.
Posted by Michael Doherty at 2:08 PM