I'm nearing the end of my three and a half years of Shakespeare study. February 2013 was month #38. This month I read Shakespeare’s poems. This was the order in which I read them: 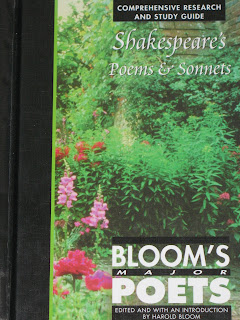 - Shakespeare’s Poems And Sonnets  edited and with an introduction by Harold Bloom  -  This is a volume in the Bloom’s Major Poets series. It is a collection critical views on a few of the sonnets and poems. The poems discussed in this book are The Phoenix And Turtle, The Rape Of Lucrece and Venus And Adonis. Sometimes the excerpts seem too short, as if we’re getting a taste of a thought, rather than the full thought. Regarding The Phoenix And Turtle, G. Wilson Knight writes, “The Turtle-Dove is a normal Shakespearian symbol of love-constancy, as at I Henry VI, II, ii, 30-1” (page 74). Murray Copland writes, “Shakespeare appears to have called his poem The Phoenix and Turtle. That is, the subject is one thing, not two” (page 76). Regarding The Rape Of Lucrece, Katherine Eisaman Maus writes, “She turns to a representation of the Trojan war for relief, not because it offers her the possibility of consolation, but because its novelty inspires her with new ways to describe and understand, and thus to experience her despair” (page 85). Regarding Venus And Adonis, Richard Lanham writes, “Venus really creates with her own praise the Adonis who can represent beauty. She creates herself with her own praise. She creates the significance of Adonis’s death by her descriptive sorrow. She creates everything. Her eloquence dominates the poem” (page 95). Published in 1999.

I also read the 83-page introduction to the updated edition of The New Cambridge Shakespeare edition of The Poems, edited by John Roe. Roe writes, “Although Shakespeare’s Sonnets were among the first of his poetic compositions, they were the last of his non-dramatic works to be published, and there is evidence that he continued to write them into the 1600s. When they did finally appear in 1609 they were followed in the same volume by a narrative poem entitled A Lover’s Complaint, which the publisher also attributed to Shakespeare. For a long time its authenticity was strongly contested. But recent scholarship has made emphatic advances in favour of its being by Shakespeare, and the poem is now confidently regarded as his. Its date of composition is still under dispute, estimates ranging from the mid-1590s to as late as the year of publication, though a majority prefers the beginning of the 1600s” (page 2).
Regarding Venus And Adonis, Roe write, “It works by contraries, celebrating the principle of erotic pleasure embodied in Venus while countering this with that refinement of spirit expressed in Adonis. Between the two polarities degrees of approximation can be observed. Adonis’s integrity is tempered by his childish petulance over the loss of his horse (325-6); but such chafing and lowering of brows is none the less attractive, as Venus finds. Venus’s voluptuous appeal is qualified by her disingenuousness; yet that aspect of her too finds an answering chord in the reader who is no longer sexually innocent” (page 5). Roe also writes, “To some degree Shakespeare follows the practice of classical authors in observing this contradictory behaviour of a deity: a goddess being still a woman and therefore subject to whim might turn petulant when crossed, acting out of character and even contrary to her own interests. But that does not sufficiently explain the force of Venus’s dire prediction, which issues in a spirit of lament as much as threat, as if she is discovering that things have changed beyond her control. It is not Adonis now but fate that has crossed her, and, understanding this, she declares her new-found opposition to love as much in terms of a submission to destiny as an edict of her own rule” (page 9). Roe also writes, “Venus might be regarded less as a goddess than as a creature from a perfect world who has strayed into a lesser one, and has to adjust to different principles” (page 11).
Regarding The Passionate Pilgrim, Roe writes, “Following the close of number 14 there surprisingly appears a second or supplementary title page, ‘Sonnets to sundry notes of Musicke’…Why this title page exists where it does is a mystery. According to Willoughby it was intended ‘to enable the latter portion of the work to be sold separately should the sale prove slow’ (p.50). Adams (pp. xxxv-xxxvi) thinks that its presence has more to do with Jaggard’s wish to appease Shakespeare, who may have proved difficult over the printing of some of his poems without his consent as well as the attribution to him of several more which he certainly did not write. Plausible as this conjecture is, it ignore Jaggard’s apparent repetition of the offence in 1612” (page 54). And then, “The ‘sonnets’ following the supplementary title page, while formally different, claim to be sonnets none the less; and the inclusion among this second group of number 16 contradicts Adams’s theory that Jaggard was trying to square things with Shakespeare by not attributing all the poems to him” (page 57).
Regarding A Lover’s Complaint, Roe writes, “Whereas the diction of A Lover’s Complaint does not occur in the plays it seems not to appear in the work of any contemporary either, which supports the argument that here as elsewhere Shakespeare is adding to his considerable vocabulary” (page 61). Roe also writes, “Whatever reservations we may entertain about the poem’s artistic success (and there are a number of those), there is no doubt as to the compelling nature of its theme: a seducer who openly displays his moral weakness, excusing his powers of attraction as if he himself were their victim rather than those whom he ensnares in his ‘craft of will’” (page 65).
This book was first published in 1992. This updated edition was published in 2006. 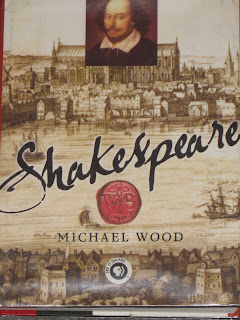 - Shakespeare  by Michael Wood  -  This biography of William Shakespeare focuses a lot on events of the time, and how those events and surroundings shaped him as an artist. It aslo includes several maps of London and Stratford-upon-Avon. Wood writes, “Unlike the works of most of his urban or university-educated contemporaries, Shakespeare’s plays are full of images of flowers, trees and animals. His linguistic roots are here too – not in the more socially acceptable speech of London or the court” (page 17).  Regarding The Merry Wives Of Windsor, Wood writes, “A seventeenth-century story claims that Queen Elizabeth herself had requested ‘one more play’ about Falstaff, this time showing him in love; Shakespeare, it is said, dashed off the piece in two weeks. But new evidence suggests that Merry Wives cannot have been written until much later, after Henry V (1599), in which Falstaff dies. This clearly disappointed his many fans, including, it seems, the queen herself. It is now thought that the masque at the end of Merry Wives was the show performed to celebrate the election of new Knights of the Garter (including the new Lord Hunsdon) on 23 April 1597. It was only subsequently (at the queen’s request?), with the typical economy of a professional writer, that Shakespeare expanded it into a full-length play” (pages 208-209). Regarding other plays attributed to Shakespeare, Wood writes, “But among the plays performed then by the King’s Men are some that, intriguingly, were printed at that time with Shakespeare’s byline: The London Prodigal of 1605 and A Yorkshire Tragedy of 1608. The popular tragi-comedy The Merry Devil Of Edmonton was later also credited to him” (page 292).  Regarding the May 1606 Act of Parliament to “Restrain the Abuses of Players,” Wood writes, “What Shakespeare and his colleagues feared is revealed by a comparison of the Quarto of Othello, which is thought to be a pre-1606 text, and the revised Folio text, published after his death. The first version contains more than fifty oaths and profanities, especially in the racist misogynist rants of Iago; the Folio text has none. The oaths are mainly old English ones using the name of God, such as ‘Zouns’ (God’s wounds) and ‘Sblood’ (God’s blood), although the fact that ‘Tush’ is dropped from the play’s opening line suggests the company were jumpy about what might be thought profane” (page 293). Published in 2003.

(Next month is the sonnets.)
Posted by Michael Doherty at 6:19 PM