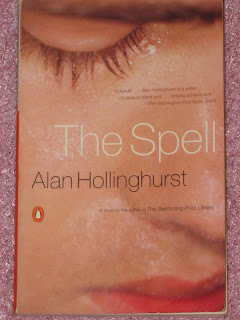 Alan Hollinghurst’s 1998 novel The Spell has several references to Shakespeare. The first is in a description of one of the book’s minor characters: “Terry was a local factotum and Romeo, with a family interest in the Broad Down caravan park, a famous eyesore on the other side of Bridport, as well as a vaguer association with the pretentious Bride Mill Hotel” (page 47).

The third is a reference to A Midsummer Night’s Dream: “A yellow quarter-moon had appeared between the beautiful tall crocketed finials of the church tower. Margery said, ‘I suppose it’s all a sort of Midsummer Night’s Dream’” (page 122). Hollinghurst then continues: “Mike wasn’t having this. ‘It is not a Midsummer Night’s Dream,’ he said. ‘People are always getting this wrong. Yesterday was the longest day, the 21st. That’s a fact, an astronomical fact. Midsummer Day, which is an ancient pagan festival, is on the 24th. Tomorrow, if you must, is Midsummer Eve.’ He shook his head furiously. ‘Today is nothing, absolutely nothing’” (page 122).

The fourth reference is to Shakespeare himself: “There was also an R. Swinburne, which Tony said people wanted to believe was A. Swinburne having trouble with his stylus; and a Wm Shakspere, facetiously introduced by Tony’s grandfather when he was a boy” (pages 177-178).

Posted by Michael Doherty at 3:02 PM