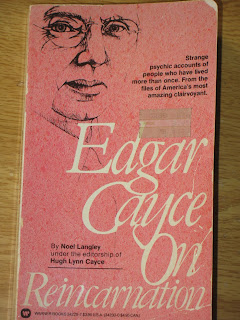 There is a series of books on Edgar Cayce and the readings he performed for people. Noel Langley’s Edgar Cayce On Reincarnation obviously focuses on the concept of reincarnation, which Edgar Cayce explicitly believed in. And, like almost every book I read, it contains some Shakespeare references. The first is a reference to As You Like It, and specifically to a famous line from Jacques’ speech. Langley writes, “ONE MAN IN HIS TIME PLAYS MANY PARTS” (p. 36). In the section that follows that line, there are several Shakespeare references. Langley writes: “Put yourself in the shoes of the great Shakespearean actor, Sir Laurence Olivier, whose theatrical genius has given us definitive portrayals of Henry V, Hamlet, Richard III and Othello. Each one of these roles is a perfect and fully resolved creation in its own right; none of them derivative of the others” (p. 36). He continues, “But the difference becomes instantly apparent when he stands in the wings of the Old Vic Theater, about to make his first entrance as Othello” (p. 36). And then: “Laurence Olivier is fast becoming a vague dreamy blur in his memory. His sole identification is with Othello. He concentrates only on the emotions he must soon evoke. The canvas scenery disappears, and a real street in Venice takes its place. The voices of the other actors continue, but are now emanating from the throats of flesh-and-blood sixteenth-century Venetians” (pages. 36-37). Langley continues with this analogy: “Now – imagine him passionately declaiming, drawing on the last reserves of his emotional energy, yet maintaining split-second discipline as he times each syllable – and tell me if he would have time to dwell proudly on his press notices for his Hamlet, or glow with nostalgia at the memory of the ovations he received for his Richard III, or suddenly wish he had used a different accent and makeup in his film of Henry V” (p. 37). He adds: “Let me assure you he would be incapable of remembering anything beyond Othello’s immediate infatuation for Desdemona. Even during the intermissions and offstage waits, he would still be Othello – an Othello relaxing, perhaps; as the body does in sleep; but still Othello. Not until the final curtain has fallen and the audience left the theater, not until his costume and makeup are removed, can he be in any sort of condition to discuss the critical pros and cons of his previous triumphs as Henry V, Hamlet and Richard III” (p. 37). Interestingly, Langley mentions one performance that he considers terrible, that in the film of The Beggar’s Opera. He then writes: “What kind of performance could his ‘Othello’ audience expect of him, if his mind were so obsessed by that one failure that it impelled him to stop short in the middle of his performance as Othello to whisper to Desdemona: ‘Ye Gods, old dear, what an absolute jackass I made of myself as MacHeath!’” (pages 37-38). He then asks, “What would happen to the rapport he had so carefully built up between his Othello and the audience?” (p. 38). This is all related to the question of why people don’t remember their past lives.

A little later Langley writes, “and the other was spiritually insulated against the ‘sea of sorrows’ to which man falls heir” (p. 41). This could be a combination of references to both Hamlet and The Tempest. In Hamlet’s most famous soliloquy, he says “a sea of troubles” and then “the thousand natural shocks/That flesh is heir to.” In The Tempest, Prospero says “Sit still, and hear the last of our sea-sorrow.” So, maybe, maybe not. Then at the beginning of the book’s fourth chapter, there is a subtitle: “THE WAGES OF VIRTUE, AND THE WAGES OF SIN” (p. 49). At the end of King Lear, Albany says, “All friends shall taste/The wages of their virtue.” There is then another reference to The Tempest: “These humanoids or mutants feature extensively in the Atlantean records as a primitive form of antediluvian life, the last faint echoes of which linger in Shakespeare’s Caliban and in the fauns, centaurs and minotaurs of Greek mythology” (p. 58). There is also another reference to King Lear: “and the ego depends for its self-preservation on the illusion that it is more sinned against than sinning” (p. 126). Lear says, “I am a man/More sinned against than sinning.” This book also contains a reference to Macbeth, with Langley writing “an incompatible mixture of dedicated zealotry and infirmity of purpose” (p. 180). Lady Macbeth, upset when her husband suddenly balks at returning the daggers to the scene of the crime, says, “Infirm of purpose!” There is another reference to Othello, with Langley writing “In brief, concealed beneath all the pomp and circumstance of the Fifth Council there was a witchhunt in full cry” (p. 198). This is a reference to Othello’s line “Pride, pomp and circumstance of glorious war!”

Edgar Cayce On Reincarnation was published in 1967.
Posted by Michael Doherty at 3:22 PM