Shakespeare References in What Just Happened? 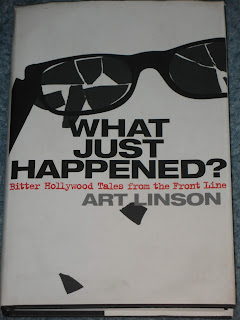 I brought two books to read on my trip to Boston, and both contain Shakespeare references. Both are about producing films, and the titles of both are questions. The first one I read was What Just Happened?: Bitter Hollywood Tales From The Front Line by Art Linson. This one contains two references. The first is a reference to Macbeth. Art Linson writes, “You’ll see, Mamet’s gonna have to sound like Richard Burton in a tutu reciting Macbeth before you’re gonna get the cash” (p. 32). The second makes use of the title of one of Shakespeare’s comedies. Linson writes: “After all, we had more than a week before we burned some film, and there was no hard evidence that Alec was going to hold on to the Long Island Santa Claus look. At least not once he thought it through. This was much ado about nothing” (p. 69).

What Just Happened?: Bitter Hollywood Tales From The Front Line was published in 2002 by Bloomsbury. The copy I read was the First U.S. Edition.
Posted by Michael Doherty at 3:44 PM