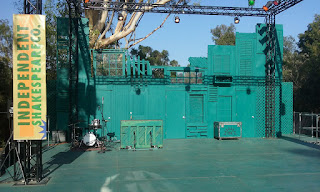 The Two Gentlemen Of Verona can be a difficult comedy because of Proteus’ happy ending after his atrocious behavior and because of Valentine’s one troublesome line near the end. But if any theatre company can make those elements work well, it is the Independent Shakespeare Company, and this group comes up with solutions for both of these problems in this summer’s production. But more on that in a bit.

The Independent Shakespeare Company performs two Shakespeare plays in Griffith Park each summer. This year’s choices are Measure For Measure and The Two Gentlemen Of Verona. The set for The Two Gentlemen Of Verona is the same basic structure as that used for Measure For Measure, but now painted in monochrome – a bluish green. A drum kit and upright piano (as well as a couple of amps) are set up upstage right (and these will be put to excellent – and often humorous – use throughout the production). Before the play, the band does a few numbers (Del Shannon’s “Runaway,” Chuck Berry’s “You Never Can Tell,” Little Richard’s “Ready Teddy”), inviting folks up on stage to dance. Several kids (it seemed like half the schools of Los Angeles decided to attend last night’s performance) took them up on the opportunity. The vocal microphone is in that 1950s style, fitting the chosen music. The music and the dancing established a fun atmosphere even before the performance began, and I have to say this production was possibly the most enjoyable of all this company’s shows that I’ve attended, just in terms of pure fun. The Two Gentlemen Of Verona is certainly not among my favorites of Shakespeare’s plays, but I had a fantastic time at this performance.

The show begins with a woman walking across the front of the stage with a sign that says, “Verona” (later we’d see a sign for “Milan”), while couples dance to the band playing The Skyliners’ “Since I Don’t Have You.” I often have mixed feelings about setting Shakespeare’s plays in modern settings, but this production works remarkably well. The dancers freeze in tableau as Valentine and Proteus begin their dialogue. Both are dressed in plaid jackets, Valentine in mustard-color pants, and Proteus in pale green pants with matching bow tie. This production uses music throughout, and there are moments where characters sing. In the first scene, Speed delivers a speech as a rap, and Proteus answers in kind (this is the dialogue about Speed being a sheep). And when Julia says to Lucetta, “Let’s see your song,” Lucetta sings and plays a bit of “Fever.” Later, Thurio (Lorenzo González) delivers the “Who is Silvia?” song, which is wonderful. The use of music really calls attention to the numerous references to music in the dialogue (and there are plenty). And as I mentioned, this production makes humorous use of the band and the instruments. For example, when Julia says “Lucetta, now we are alone,” the piano player takes the hint and ducks down behind the piano.

The cast is quite strong (as I’ve come to expect from this company), but the night’s standout performance is by Erika Soto as Julia. She is absolutely wonderful, particularly in the scenes with Lucetta (April Fritz). She delivers delightful readings of lines like “Then let it lie for those it concerns.” And the entire exchange during the scene where Lucetta helps dress her as a boy is hilarious. I love how Julia struggles to zip up her jeans over her new manhood. Nikhil Pai is excellent as Valentine. I love the concern in his voice when he asks Speed, “How long hath she been deformed?” And I love that he really gets into the line “Love’s a mighty lord,” leading the audience to laugh. His excitement is often the cause of laughter, as on his line about the “ladder made of cords.” But perhaps my favorite moment of his is when he delivers the “What light is light, if Silvia be not seen” speech. Here there is a great change in tone, as he gives us a serious and heartfelt delivery, which is quite moving and natural, not feeling out of place amid so much laughter. A good deal of that laughter is caused by William Elsman as the Duke of Milan, particularly when he incorporates his work as drummer into the action. His exchange with Valentine is a whole lot of fun, especially when he lists his daughter’s attributes (“peevish, sullen, froward,/Proud, disobedient, stubborn”), but Elsman can also crack the audience up with just a look. Some of the night’s biggest laughs come from the play between David Melville as Launce and Lorenzo González as his dog, Crab. David Melville, who also directed the production, leaves a pause after the “worser sole” joke as if waiting for it to sink in, proud of the humor. And the exchange between Launce and Speed is a delight. Xavi Moreno provides many laughs as Speed. Only a few modern references end up in the dialogue, as when Launce describes his sister as being “on Weight Watchers.”

Proteus is a difficult character, as he does some despicable things, turning easily away from his love in order to woo his best friend’s love, and even going so far as to have his friend banished in order to pursue Silvia without impediment. So it’s difficult to make an audience like him, but Evan Lewis Smith does a good job. There is something about him as an actor that is immediately likeable, and so we can go a long way with the character before turning against him. At the end of course, Proteus and Julia end up together, which can be difficult for a modern audience to accept. This production solves that problem by softening the attempted rape (yes, Proteus tries to force Silvia to yield to him), and by having Julia sing a kick-ass song at the very end, making Proteus kneel before her, and even slaps him hard across the face. The slap isn’t really done in hatred – after all, Julia does truly love Proteus. It’s more of a “don’t do that shit again” kind of a slap, a slap to make sure he’s regained his senses. And the audience cheers it. As for the troublesome line that Valentine must deliver – “All that was mine in Silvia I give thee” – this production gives Silvia a line in response, an incredulous “What?” That line is basically the audience’s reaction too.

There is one twenty-minute intermission, coming at the end of Act II. By the way, the dance scene the leads to intermission (to the tune of “Route 66”) is an absolute delight. I particularly love the use of signs showing Julia’s progress as she travels to see Proteus. Toward the end of intermission, the band plays Don Woody’s “You’re Barking Up The Wrong Tree,” with Crab adding the barks, which is also really funny. And to get the second act going, the band covers Ritchie Valens’ “Come On, Let’s Go.” This production of The Two Gentlemen Of Verona runs through September 2, 2017 at Griffith Park in Los Angeles. The show is free, though donations are encouraged. There is also a merchandise and concessions table to help fund this excellent company.
Posted by Michael Doherty at 3:38 PM