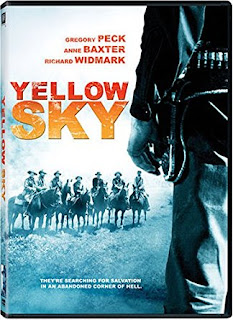 Yellow Sky is a western starring Gregory Peck, Anne Baxter and Richard Widmark. It is very loosely based on The Tempest. As the title card at the beginning tells us, it takes place in “The West – 1867.” We hear sounds of an approaching storm as several men ride on horseback through unfamiliar territory. It is a storm that ends up not coming from the sky, but from within the men themselves. They visit a town and go to a saloon, but they are really there to rob a bank, which they do. As they ride out to the land they’d visited earlier after the robbery, one of them is shot in the chase, leaving six to escape across a harsh desert.

After several days in the desert, and the loss of a horse, they see a town in the distance. (By the way, there are some excellent wide shots of them in the desert, showing the men small against a great landscape.) But as they approach the town, they find it deserted. A sign tells them the name of the town is Yellow Sky. They all collapse in defeat. But soon they realize they are not completely alone. A young woman named Constance Mae (nicknamed Mike) stands over them with a gun. When they ask for water, she directs them to a spring. She lives with her grandfather in a house at the other end of town. Though she is the Miranda character in this story, she’s able to handle herself around men, and is a pretty good shot with a rifle. When she arrived in this area, she was just a baby, according to her grandfather, just as Miranda was young when she arrived on the island in The Tempest. Her grandfather is the Prospero character, but there is no magic in this adaptation. There is no Ariel, and there are no other spirits. There is not even a Caliban. There are some Apaches who arrive, and who are friends with Mike’s grandfather, and who follow his direction.

The six men believe that the Mike and her grandfather are hiding gold, and they aim to take all of it, though James Dawson (Gregory Peck) promises the grandfather that they will only take half of it. He has a change of heart after realizing that the grandfather kept them from being hurt by the Apaches, and decides to only take half as he’d promised. The other men aren’t too keen on that decision, however. And so of course there is some gun fighting. A couple of the men are more comical, especially Walrus, who is like Stephano in his appreciation of the drink.

By the end, Mike and her grandfather have become friendly with a few of the men, and the film has a happy ending. Though the connections to the Shakespeare play are loose, Yellow Sky is actually a really good film.

Yellow Sky was directed by William A. Wellman. The DVD includes three still galleries, including one of the promotional materials, one of production photos and one of behind-the-scenes photos. The film’s trailer is also included.
Posted by Michael Doherty at 2:36 AM