Shakespeare References in The Letters Of Sigmund Freud 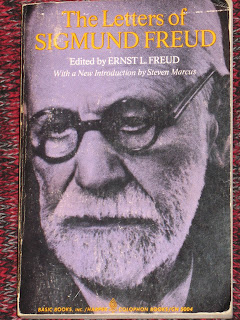 He refers to Hamlet most often, which probably will come as no surprise, considering his field. In a letter from 1882, Freud writes: “Just because years ago at this season (owing to a miscalculation) Jerusalem had been destroyed I was to be prevented from speaking to my girl on the last day of my stay. ‘But what’s Hecuba to me?’ Jerusalem is destroyed and Marty and I are alive and happy” (p. 19). That’s a reference to Hamlet’s line, “What’s Hecuba to him, or he to Hecuba,” from one of his famous soliloquies. In a letter to Martha from 1885, Freud writes, “This we cannot do, and there’s the rub” (p. 156), a reference to another of his famous soliloquies. In a letter from 1907, answering a request for a list of ten good books, Freud writes: “You don’t say ‘the ten greatest works’ (of world literature), in which case, like so many other people, I should feel obliged to mention: Homer, the tragedies of Sophocles, Goethe’s Faust, Shakespeare’s Hamlet, Macbeth, etc.” (pages 268-269). In a letter from 1936 he writes, “Truth is unobtainable; humanity does not deserve it, and incidentally, wasn’t our Prince Hamlet right when he asked whether anyone would escape whipping if he got what he deserved?” (p. 430). And he ends a letter from 1938 by writing, “The rest – you will know what I mean – is silence” (p. 442), a reference to Hamlet’s last line.

He also refers to King Lear a few times. In a letter to Martha from 1883 he writes: “But this letter is not to Gardener Bunsow, rather to you, my Marty, my Cordelia-Marty. Why Cordelia? This will be explained later” (p. 40). Later in the same letter he writes: “And then I opened up and said: ‘This same Martha who at the moment has a sore throat in Dusternbrook, is in reality a sweet Cordelia, and we are already on terms of the closest intimacy and can say anything to each other.’ Whereupon he said he too always calls his wife by that name because she is incapable of displaying affection to others, even including her own father. And the ears of both Cordelias, the one of thirty-seven and the other of twenty-two, must have been ringing while we were thinking of them with serious tenderness” (p. 41). In a letter from 1930, Freud writes: “I thank you for kindly sending me your translation of King Lear, which gave me the opportunity of rereading this powerful work” (p. 395). He then continues: “As to your question whether one is justified in considering Lear a case of hysteria, I should like to say that one is hardly entitled to expect from a poet a clinically correct description of a mental illness. It should be enough that our feelings are at no point offended and that our so-called popular psychiatry enables us to follow the person described as abnormal in all his deviations. This is the case with Lear; we are not shocked when, in his sorrow, he abandons contact with reality, nor when, clinging to the trauma, he indulges in phantasies of revenge; nor when, in his excess of passion, he storms and rages, although the picture of a consistent psychosis is disrupted by such behavior. As a matter of fact I am not sure whether such hybrid formations of an affective clinging to a trauma and a psychotic turning away from it do not occur often enough in reality. The fact that he calms down and reacts normally when he realizes he is safely protected by Cordelia doesn’t seem to me to justify a diagnosis of hysteria” (p. 395).

As for Macbeth, in a letter from 1878 he writes, “I am also sending you herewith my collected works, not my complete ones as I have reason to suspect, for I am awaiting the correction of a third, and a fourth and fifth keep appearing in my prescient mind, which is startled by them like Macbeth by the ghosts of the English kings: ‘What! Will the line stretch out to the crack of doom?’” (p. 6).

He also refers to Twelfth Night. In a letter from 1882 he writes: “Remember the words of an Anglo-Saxon poet who invented many gay and sad plays and himself acted in them, one William Shakespeare: ‘Journeys end in lovers meeting,/Every wise man’s son doth know’ and how he goes on to ask: ‘What is love? ‘tis not hereafter;/Present mirth hath present laughter;/What’s to come is still unsure:/In delay there lies no plenty;/Then come kiss me, sweet and twenty,/Youth’s a stuff will not endure.’ But should you not understand these frolicsome lines, consult none other than A.W. Schlegel’s translation of Twelfth Night; or, What You Will” (p. 13).

Freud wrote about The Merchant Of Venice, and in a letter from 1913, he refers to his work: “My closest companion will be my little daughter, who is developing very well at the moment (you will long ago have guessed the subjective condition for the ‘Choice of the Three Caskets’” (p. 301). Freud’s work was actually titled The Theme of The Three Caskets, referring to Portia’s suitors having to choose from three caskets. And he refers to Romeo And Juliet in a letter from 1934: “Our attitude to the two political possibilities for Austria’s future can only be summed up in Mercutio’s line in Romeo And Juliet: ‘A plague on both your houses’” (p. 420). And in the list of addressees, Richard Flatter is described, in part, as a “translator of Shakespeare into German” (p. 465).