Shakespeare References in The Cavalier Case 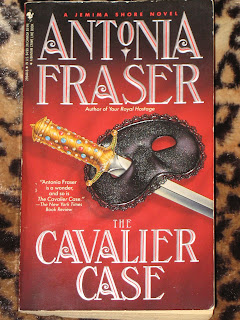 Shakespeare references continue to pop up in nearly everything I read. Antonia Fraser’s mystery novel The Cavalier Case contains several Shakespeare references. The first is a Hamlet reference: “However, given that the ghost of Decimus was due to pop up at the siege of Lackland Court, perhaps it was just as well Olivia, unlike Hamlet’s mother, Gertrude, had no new husband at her side” (p. 99). There are a few more Hamlet references in this novel. Fraser writes, “to the extent that Jemima thought she definitely protested too much” (p. 105) a reference to Gertrude’s line, “The lady doth protest too much, methinks.” And there is a reference to the famous bit about Yorick: “Lady Manfred’s distress – it later turned out that the skull had been the first object she disinterred – was the more understandable. ‘Alas poor Yorick,’ went on the authoritative voice, ‘ and all that. I nearly spouted the whole speech, I can tell you’” (p. 165). And it’s possible that Fraser is referring to the play when she writes, “Even if he had been ‘horrified’ – the word heard by Jemima behind her own kind of plastic arras on the tennis court” (p. 228).

There are also references to The Tragedy Of Richard The Third. Fraser writes: “It might be a rather strange method of wooing – the image of Richard III seducing Lady Anne over her husband’s bier came to her – ‘was ever woman in this humor woo’d?’ – since she had seen the play at the Barbican the night before with Cass, with its merry opening references to Mistress Shore’s ‘cherry lip, bonny eye and passing pleasing tongue.’ But who was to say it was an effective one? ‘Was ever woman in this humor won?’ the crookback future king, as played by Anton Lesser, had concluded” (p. 118). And then a little later Fraser writes: “Had she herself not been a perfectly willing party to it all – seduction of the fittest, as you might say? (Richard III came to mind again: ‘Was ever woman in this humor won’)” (p. 126).

But the play most often referred to in this novel is The Tragedy Of Macbeth. Fraser writes: “Otherwise he praised the house lavishly – ‘What a perfectly delightful situation you’ve got here’ and ‘Good to get all this fresh country air after Westminster’ – in terms which irresistibly reminded her of Duncan arriving chez the Macbeths: ‘This castle hath a pleasant seat.’ Duncan too had praised the good fresh (Scottish) air: Jemima trusted the Home Secretary’s fate at Lady Manfred’s hands would be kinder” (p. 161). Fraser then writes: “It was not even evoked by the prospect of her mission: for Jemima, having taken the decision to carry it out, did not allow herself at this point to think about what would happen if she failed (any more than she intended to digest at this point Alix’s astonishing revelation – was she implying that Dan would marry her? Ah well, as Macbeth said, there would be a time for such a word…)” (p. 220). Most of the Macbeth references are at the end of the novel. Fraser writes: “Said she did it all for him, to save his family heritage. A sort of Lady Macbeth who didn’t even let Macbeth know what was going on” (p. 226). And then: “Alix, the loyal if occasionally neglected mistress, was certainly no Lady Macbeth” (p. 227). And: “So perhaps after all Lady Macbeth was not the right analogy” (p. 229). And finally: “And Zena in the same bleak voice quoted Macbeth: ‘We are so deep in blood imbued –’ She added: ‘I believe that happens to people. They don’t know when to stop’” (p. 235).

There is also a reference to Shakespeare: “The transsexual thing is so important in the seventeenth century – how on earth can we understand Shakespeare by just going on about rent boys” (p. 204).

The Cavalier Case was published in 1991.
Posted by Michael Doherty at 11:02 AM