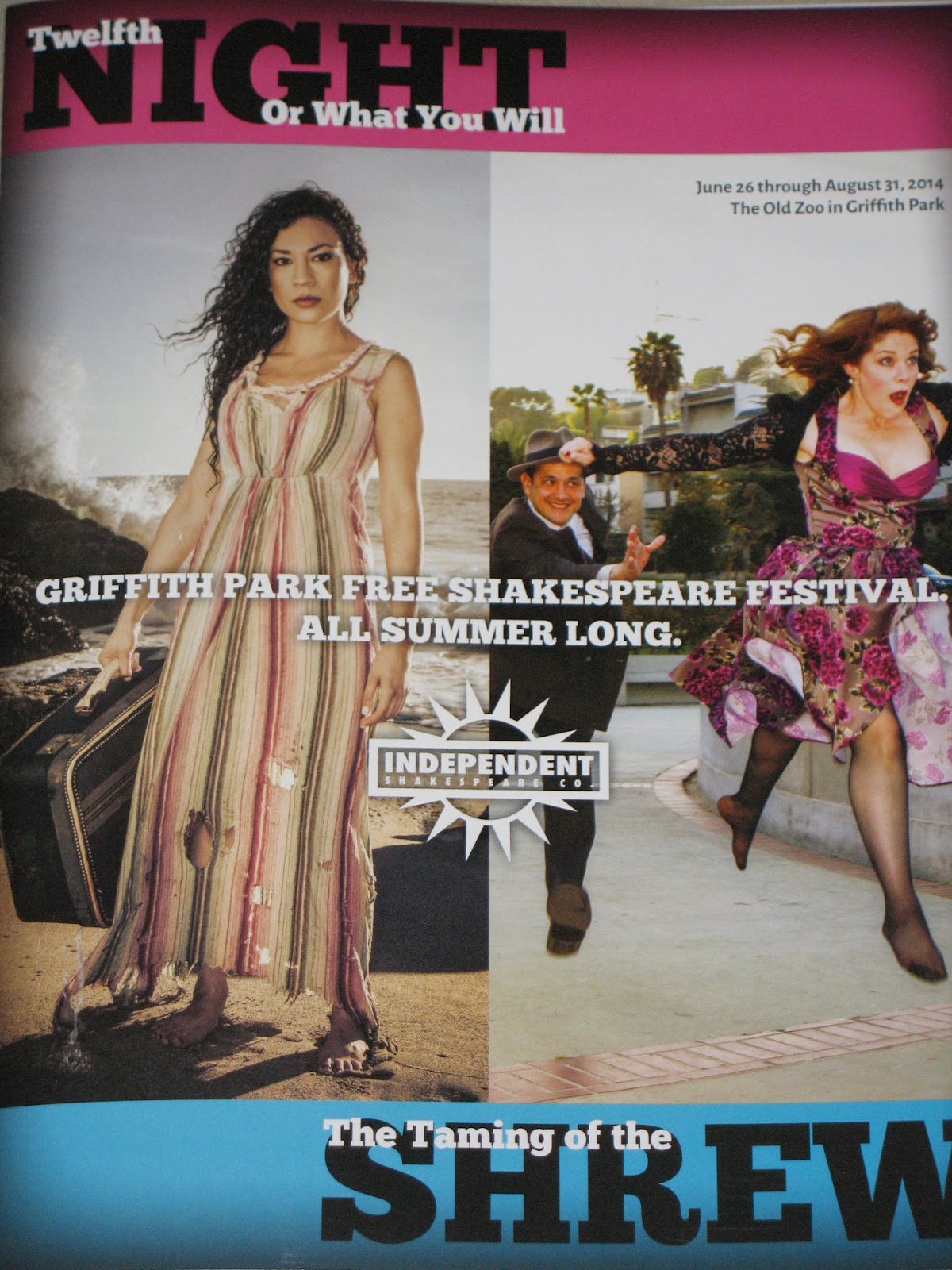 I have come to expect great things from the Independent Shakespeare Company, and this group has not disappointed me yet. Their new production of Twelfth Night or What You Will is a total delight.

The first line of this play is one of those famous lines that many people know regardless of whether they’ve ever seen or read a Shakespeare play. This production chooses an interesting and original way to approach it. David Melville comes on stage with a small drum kit attached to his back and a banjo, and reads the opening announcements. He then plays a song on the banjo, the last line of which is “If music be the food of love.” The play then begins, with music playing on a Victrola. Orsino (Ryan Vincent Anderson) is affected by the music and begins to cry, so his servant shuts it off. He then delivers the opening line: “If music be the food of love, play on!” So the Victrola is turned back on.

It’s a playful and excellent start to the production, and immediately sets the tone for what is to follow. The set has two levels, and the company quickly makes use of both, having Viola (Kalean Ung) and the Captain begin the second scene on the upper level.

As is often the case with this play, it really gets going with the introduction of Sir Toby, Maria and Sir Andrew in the third scene. The entire cast is quite strong, but these three actors are standouts for me, and their first scene together is excellent. Toby is played by Danny Campbell, whom I loved as Falstaff in The Merry Wives Of Windsor a few years ago. Sir Andrew (André Martin) wears a yellow suit with bow tie, top hat and pants that are just a bit short, so you get a sense of who he is before he ever speaks a word. When Maria (Bernadette Sullivan) says “bring your hand to th’ butt’ry bar and let it drink,” she puts Andrew’s hand on her breast and holds it there, and his reaction is hilarious. This group seems to always toss in at least a few modern references in their outdoor productions, and in this scene when Andrew boasts of his “back-trick,” he does Michael Jackson’s moonwalk. Later, Feste improvises a few lines to add to his list of jokes to amuse Andrew, including “Los Angeles has a wonderful public transportation system.”

This play has a couple of inherent difficulties. One of them is having Viola be believable as a man (this, of course, is a difficulty in several other Shakespeare plays), and this production does a really good job with that. As Cesario, Viola wears a suit and black bow tie, and carries herself differently. It helps too that Olivia picks a very precise moment when she begins to be attracted to Cesario, which is one of the many funny moments in this production. (My favorite Olivia moment, however, is when she is suddenly confronted by what she sees as two Cesarios, and exclaims, “Most wonderful!” Her delivery is full of joy, as if she’ll get both of them, which is perfect.)

Feste (David Melville) uses a toy horn to punch his jokes at certain points. It’s an old device, but it’s remarkable how this company can take such things and breathe life into them. Another example is that Toby does the old gag of kicking his hat as he tries to pick it up, but makes it work. And there is some silly business with Andrew’s suitcases, with Fabian returning one as Andrew brings out the other. We’ve seen all of this before, and perhaps that’s the point. But it all works well.

The actors also make great use of the outdoor space, making several entrances from the audience. And early in the play Malvolio drags Feste out through the audience as Feste begs the chance to explain his reasoning in referring to Olivia as the fool. Probably the best use of the audience is when Malvolio reads the planted letter, and Toby, Fabian and Andrew spy on him from among the crowd. (Andrew has some great moments in that scene, like when Malvolio speaks of him and Andrew blurts out, “That’s me, I warrant you.” What’s great is that he delivers the line with a certain amount of pride.)

Fabian is female in this production, dressed as a maid, and played well by Julia Aks. There is some attraction between her and Feste, which presents opportunities for added humor, as when they’re interrupted by Toby and Andrew. When Toby opens the door to reveal him, he gives the “Welcome, ass” line, another great moment. Fabian also accompanies Feste on accordion and backing vocals on “O Mistress Mine” and on the final song.

Orsino gets a few wonderful moments too, especially when after demanding a song from Feste he is reduced to tears by the music and has Cesario sit next to him. And there is a wonderful moment near the end where he grabs Sebastian instead of Cesario/Viola.

And of course Luis Galindo is magnificent as Malvolio. After discovering and reading the letter he believes is from his mistress, his reading of “I am happy” is hilarious. And then he takes a moment to force his face into a smile, something that is clearly not easy for him to do. What I love is that by the end, you do come to feel for Malvolio.

The last scene of this play is actually a somewhat tough one to do, particularly in making it believable that Viola doesn’t figure out sooner that Sebastian is alive. But Kalean Ung makes it work quite well. By the way, this play has for me what is possibly the saddest line in all of Shakespeare: “I was adored once too.” But it’s also quite funny, and it gets a laugh in this production.

There is one intermission, coming at the end of Act II.

Twelfth Night or What You Will is directed by Melissa Chalsma, who directed the company's recent production of Romeo And Juliet. It runs through July 20th, with performances on Thursdays, Fridays, Saturdays and Sundays. After the 20th, the Independent Shakespeare Company will present The Taming Of The Shrew. But there are still nights here and there until the end of August when they return to Twelfth Night. Check the company’s calendar. I highly recommend seeing this production. In addition to an excellent cast, it’s wonderful to see Shakespeare performed in the park. Be sure to take a sweater or light jacket, for it gets cool by intermission.

Posted by Michael Doherty at 11:58 PM