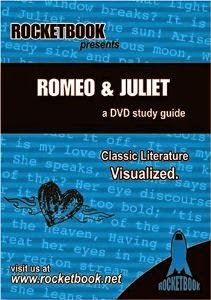 Rocketbook Presents: Romeo & Juliet (2005) stars Drew Lavey as the DVD’s host. It was written by Yael Prizant. This DVD is a study guide for students. It goes through the play scene by scene, first providing a summary of a scene, with the actions divided into events which are listed on screen while the narrator describes the play. On the left side of the screen are some illustrations. After each scene’s summary, there is then an analysis of the scene. Following the analysis, there is a quiz.

The narration has a very serious tone, and seems to largely overlook the comedy of the play, even when describing, for example, the sexual reference of the Nurse in an early scene (“Thou wilt fall backward”). I think this DVD would bore the hell out of students, as the information is offered in a rather cold manner.

For some reason, Drew Lavey pronounces Rosaline’s name as “Rose-uh-linn.” The narrator keeps talking about the theme of “Youth vs. Age,” reminding me of what I hated about school, reducing great and complex work and ideas to simple statements.

This DVD, like most modern editors, separates the balcony scene from the scene where Benvolio and Mercutio are looking for Romeo, though Romeo never leaves the stage and these two scenes are really one scene. Some of the important speeches are hardly mentioned, such as Juliet’s “Gallop apace” speech.  But there some good points made in this DVD study. Regarding Balthasar’s news about Juliet in Act V, the narrator says, “Romeo does not seem particularly surprised to hear this, and grows more distracted and angry than saddened by the news.”

One of the pop quizzes has a question about how Romeo views Juliet. The response the DVD is looking for is “Light,” but one of the options is “Food,” which made me laugh. Some of the questions in the quizzes are really about interpretation, so I think it’s rather dangerous for the DVD to suggest that one short answer is definitively correct. For example, one question regarding Act III Scene iv is: “What are Capulet’s primary reasons for offering Juliet’s hand in marriage?” The DVD has as the correct response: “Increased wealth and social status.” But what it fails to take into consideration is the anger of the Prince regarding Mercutio’s recent murder by a member of the Capulet family. At this point, it might no longer be a matter of wealth or social status, but just safety. If Paris, a kinsman of the prince, is united with a member of the Capulet family immediately, it may soothe the Prince’s anger toward that family.

A question in a later quiz asks, “Which words best describe Juliet as she prepares to drink the potion?” The answer the DVD seeks is “Composed and decisive.” One of the other options is “Unsure and hesitant.” Well, she does have a moment of hesitation, as she says, “What if it be a poison which the friar/Subtly hath minist’red to have me dead.”

The DVD ends with a spoken conclusion by Drew Lavey.

The DVD includes two bonus features: Character Descriptions and Illustration Slideshow. In the first, Drew Lavey gives descriptions of many of the characters, including Romeo, Juliet, Mercutio, Friar Laurence, Tybalt and Paris. (It’s odd that the Nurse is left out of this feature.) Each description is approximately a minute long. Illustration Slideshow is approximately four minutes long.

Posted by Michael Doherty at 7:18 PM