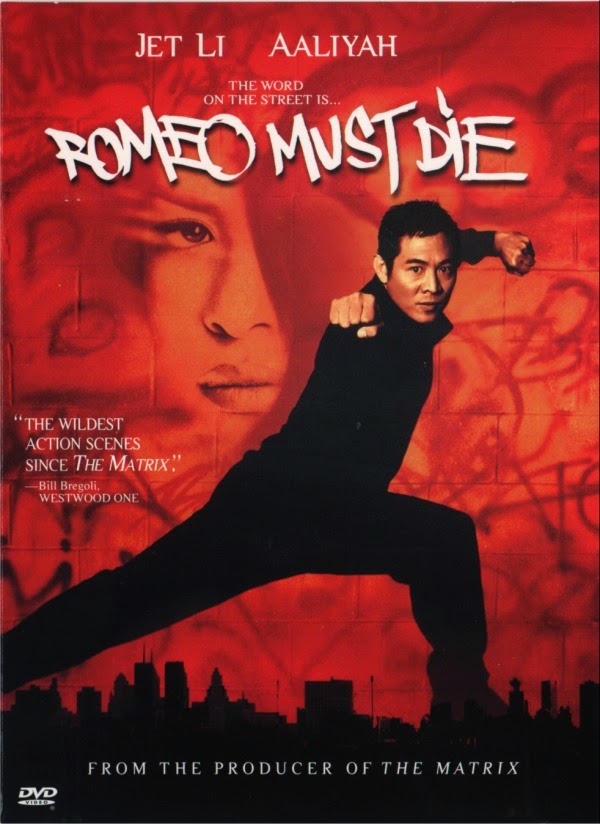 Romeo Must Die  (2000) stars Jet Li, Aaliyah Haughton, Delroy Lindo, and Isaiah Washington. It was directed by Andrzej Bartkowiak.  This film is a very loose adaptation of Romeo And Juliet, set in modern day Oakland, with the two warring families as a black and Asian family. The opening brawl takes place in a club, and is dominated by martial arts, awful dialogue and even worse music. (One problem with this film is its music. It’s all terrible – the score, as well as every song chosen for its soundtrack.) Anyway, the fight begins because of Po’s presence in what is essentially a black club. Po’s murdered body is then discovered the next day. Isaak O’Day (Delroy Lindo), the head of the black family, did not order the hit, and orders an investigation into who did. He also calls for a meeting with the head of the Sing family. The meeting goes well, but Isaak understandably orders one of his men, Maurice, to be a bodyguard for his daughter, Trish (Aaliyah Haughton). Meanwhile in a Hong Kong prison, Han Sing (Jet Li) is told of his brother Po’s murder, and manages to escape in order to go to Oakland to learn what happened. Trish gives Maurice the slip in a terrible scene in a music store, and jumps into the back of a taxi that Han had just stolen. They flirt a bit, and she realizes right away that he stole the taxi. Later, following a lead he got at his dead brother’s apartment, Han shows up at the place where Trish works just as she’s leaving. So he follows her home, and enters her apartment. When Maurice and the gang show up, he has to fight his way out, but makes sure he doesn’t actually kill anyone. Colin, Trish’s brother, is killed, so Han and Trish team up to discover who killed their brothers. It all has to do with a deal to sell some waterfront property to the NFL. At one point, Han does sneak in through Trisha’s window. And at the end, Mac (Isaiah Washington) actually calls Han “Romeo.” He says, “Sorry, Romeo, but you gotta die.” Romeo doesn’t die in this version. Neither does Juliet.

The two elements that make this film worth watching are Jet Li’s action scenes, which are mostly cool (though the football scene is one of the stupidest things I’ve ever seen), and Delroy Lindo’s performance as Isaak O’Day. I always enjoy watching Delroy Lindo. Most of the other actors in this film are unbearably bad, though partly it’s the fault of the ridiculous dialogue they’re given.

(The DVD’s special features include a behind-the-scenes look, and in an interview Aaliyah does mention Romeo And Juliet at one point.)

Posted by Michael Doherty at 12:57 AM