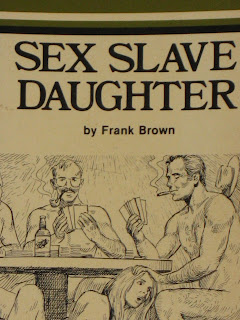 This is the kind of book that makes me wish I had kids.

Candy Miles is a sexy young newspaper delivery girl, and every guy in the neighborhood wants her. But Jerry Smith thinks he deserves her. He thinks he's better than all the rest of the guys on the block. "Why did she even condescend to speak to them? The dizzy cunt! The whole lot of them weren't worth one of her golden turds" (page 8). Golden turds?  Holy moly, what does this girl eat?  One time my turds were white and my friend thought I should go to the hospital.  I wonder what Candy's friends tell her.  And isn't a bit odd that this guy in the neighborhood has any knowledge of her bowel movements?  Yes, this book is intriguing right from the start.

Jerry Smith gets so upset over the idea of Candy talking to other men that he smacks the blonde that's in bed with his roommate Warren.

Meanwhile Candy is inside the preacher's house, and the preacher's tongue is inside Candy. "Although she found the reverend to be a repulsive old toad, she couldn't help but be excited by the situation" (page 22). "Of all the men on her route, Reverend Lee was certainly the most repulsive. He was her best-paying customer, though - probably because his tips for her services came straight out of the church treasury" (page 25). Praise Jesus.

After the preacher comes, Candy "parted her lips, allowing the reverend to insert his slimy cock between them. As her lips closed around his deflated prick, he started to piss" (pages 29-30). Now there's a tip I never got when I had a paper route. If I had, I'd probably still be working as a paperboy.

Soon Candy is delivering a paper to Jerry, who takes this opportunity to have sex with her. Has journalism ever been so exciting? She enjoys the sex, but still "as her orgasm subsided, she simultaneously brought her hands around to his face and her left knee up at his balls. As she ripped at his cheeks and slammed his nose, she twisted her knee at his balls, trying to grind them to mush" (pages 39-40). I wonder if she'll also leave his Sunday edition under the lawn sprinkler. What a little bitch.

Then she goes home and has sex with her father. She worries about herself because she finds she enjoys it. "Why does it feel so good? Why do I have to degrade myself like this?" (page 54).  Jerry, meanwhile, has decided "He would never wash his prick again as long as he lived" (page 57). Oh, I sense this story taking a turn toward the grotesque. But it also shows, does it not, how much he loves the young delivery girl. Though a moment later he also decides, "When he got his hands on her again he was going to fuck her to death" (page 58).

He decides that he and his roommate Warren will lure her out of her home and grab her, using a cat as bait. It works, but it seems they could have just called her and asked for a date, for she doesn't really struggle. In fact in the back seat of the car she tells Warren, "Eat me. Oooh, yes, yes!" (page 67).

They take her to an old gym and tie her up. Jerry has his way with her while Warren is... well, we don't know what he's doing. Then Jerry leaves to pick up the blond girl, and Warren gets his turn. Warren gets so excited that "His prick rippled with veins. His cock-knob was ready to pop off his prickshaft due to his excitement" (page 88-89). I know just how he feels, for I can still remember the first time I heard "Gypsys Tramps & Thieves." Wow!

Jerry finds the blonde, Margot, masturbating. He grabs her. "He also gathered up all the soiled panties he could find, which he would add to his own collection of the panties and bras and negligees he'd been flinching from girls and women ever since he'd been a young kid" (page 98). It's good to have a hobby, but it's no fun to work the convention center when the dirty underwear enthusiasts come to town. By the way, I'm not sure how to flinch panties and negligees. Perhaps author Frank Brown was reaching for the word "filch" but when he came up with "flinch" his brain told him it was close enough.

"Throwing Margot over his left shoulder like a sack of dirty laundry, and hugging the bag of sex-toys and dirty underwear in his right arm, he stole out of the apartment as quietly as he'd entered" (page 98). Wait a moment. If he carries Margot like a bag of dirty laundry, but then carries the actual bag of dirty laundry differently, does that mean he's insane or simply dishonest or inconsistent? Apparently it means he's insane, for Margot "knew her kidnapper was a psycho, but her sexual excitement overwhelmed any sense of fear she had" (page 99).

Soon after Jerry and Margot arrive at the gym, Jerry is kind enough to share his collection with Candy, "stuffing the yellow-stained crotches of the panties into Candy's mouth" (page 114). By the end, Candy has gained a new self-image: "I'm a sewer, Candy told herself, a sewer for men to empty their fuck slime into" (page 123). And don't worry, for this book has a happy ending for everyone, although Candy's father ends up needing to buy a new daughter.

Sex Slave Daughter is A House Of Lords Book, published in 1983 by Oakmore Enterprises, Inc.

Posted by Michael Doherty at 11:16 AM