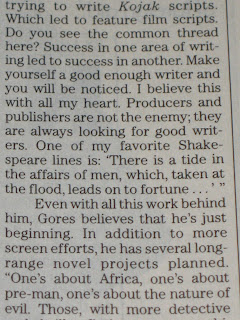 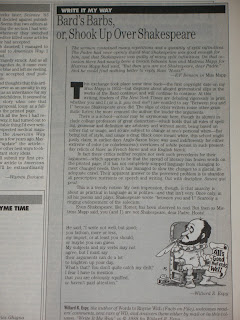 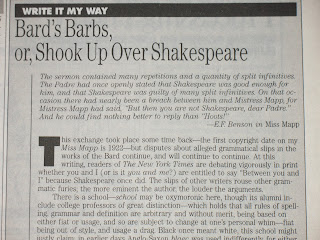 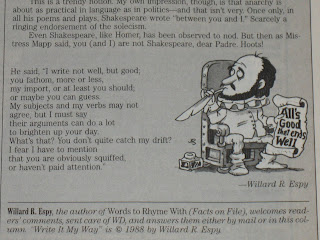 I was going through some old copies of Writer's Digest (I tend to procrastinate, and so do my spring cleaning in the summer), and of course came across a couple of references to Shakespeare.

The first is in the August 1988 issue (I said they were old copies).  In an article about Joe Gores, James McKimmey quotes him as saying, "One of my favorite Shakespeare lines is: 'There is a tide in the affairs of men, which, taken at the flood, leads on to fortune...'" (page 35).  That line, by the way, is from The Tragedy Of Julius Caesar, Act IV Scene iii.  It is in a speech that Brutus says to Cassius.

The second is in the Write It My Way column by Willard R. Espy in the December 1988 issue.  The short piece is titled, "Bard's Barbs, or, Shook Up Over Shakespeare," and is about the rules of grammar, pointing out that if Shakespeare broke the rules then everyone should be able to.  Espy writes, "At this writing, readers of The New York Times are debating vigorously in print whether you and I (or is it you and me?) are entitled to say "Between you and I" because Shakespeare once did" (page 7).  Then, toward the end of the piece, he writes, "Once only, in all his poems and plays, Shakespeare wrote 'between you and I.' Scarcely a ringing endorsement of the solecism" (page 7). There is also an illustration of Shakespeare writing, and the scroll in his hand says, "All's Good that ends Well."

It took me a while to find it, but for those who are curious, the one instance of "between you and I" is in The Merchant Of Venice.  In Act III Scene ii, Bassanio reads the letter he received from Antonio: "Sweet Bassanio, my ships have all miscarried, my creditors grow cruel, my estate is very low, my bond to the Jew is forfeit; and since, in paying it, it is impossible I should live, all debts are cleared between you and I, if I might but see you at my death."

Posted by Michael Doherty at 4:32 PM