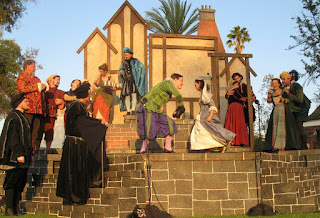 The story behind the writing of The Merry Wives Of Windsor is that Queen Elizabeth enjoyed The First Part Of King Henry The Fourth (which I think is probably the funniest of Shakespeare’s plays) and The Second Part Of King Henry The Fourth, particularly the character of Falstaff, and asked (commanded) Shakespeare to write another play depicting that character in love. The result was The Merry Wives Of Windsor, in which Falstaff woos two married women for their money. It is a light and sometimes goofy comedy with quite a bit of room for physical play, and it is one of the two plays that the theatre company Shakespeare By The Sea is currently performing (along with The Winter’s Tale).

Last night the company brought its production of The Merry Wives Of Windsor to Los Encinos State Historic Park in Encino. Of the various parks throughout the area that Shakespeare By The Sea performs, this might be my favorite. It is comfortable and pleasant, and the view of the stage is good from basically anywhere you place your blanket. Plus, there are clean bathrooms. Before the performance, artistic director Lisa Coffi and cast members Ellen Girvin and Samantha Winters conducted a question and answer session with the audience, a special treat they do on Saturdays, and they did mention the story about Queen Elizabeth requesting the play. Someone asked how the company chooses which two plays they do each summer. A good question. Of course, there has to be interest in a particular play, both by the company and the audience. Money is lost when they do lesser known works, which is a shame. One summer they did King John and All’s Well That Ends Well, which was great for Shakespeare fans, but didn’t draw in the casual theatregoers. Merry Wives has a broader appeal, and is certainly not a complicated play.

This production starts with most of the company on stage, establishing a playful, cheerful atmosphere, with drinking and merriment. Soon most of the players leave, until only Justice Shallow (Glen Eaton) and Sir Hugh Evan (Jonathan Fisher) remain, the only two characters to be dressed in darker, somber clothing, an indication that they are in opposition to those of a more festive air. The young man they intend to help, however, Abraham Slender (Kieran Flanagan), is dressed in bright green and purple, making their alliance seem a bit shaky from the outset. The costumes in this production go far in helping establish the relationships as well as the attitudes of the characters. For example, Master and Mistress Page are both dressed in green, while Master and Mistress Ford are in red and gold. Interestingly, Sir John Falstaff (Tom Killam) is also in red and gold, as he tries to take the place of Master Ford. (Of course, he also tries to woo Mistress Page, but he puts much more effort and time in with Mistress Ford.) Master Ford is a jealous man, and Falstaff is somewhat envious of him for his riches, so there that further connection between the two characters, highlighted by the choice of clothing. On “her husband’s purse,” Falstaff reaches into his own purse for the letters to Mistress Ford and Mistress Page, a nice touch indicating that his purse merely contains the hopeful plot for obtaining money rather than money itself.

The scene where Mistress Page (Bridgid M. Rose) and Mistress Ford (Ellen Girvin) compare letters and devise their plot is wonderful. The execution of their device is even more enjoyable, as when they speak in a deliberately loud and exaggerated manner for the benefit of the hidden Falstaff, and can barely contain their mirth. At one point, Mistress Ford goes even beyond what she seemingly intended, stopping herself suddenly, a delightful moment. And Falstaff’s entrance is hilarious, when he nervously asks to see the laundry basket. Mistress Page and Mistress Ford are almost in tears from laughter, hiding their faces from Falstaff. And of course there is plenty of laughter from the audience during this, and when the men struggle to lift the now overladen laundry basket. The women certainly have the most fun of any characters in this play. It is really their world, with the men hoping to catch up to them. When Master Ford (Robert O’Hare) disguises himself as Master Brook, he dons a somewhat goofy blond wig, showing that his jealousy is something to be laughed at. Then when he faces Falstaff with his own plot, he puts particular emphasis on the name “Ford” in the line “There is a gentlewoman in this town, her husband’s name is Ford,” pausing slightly, looking, maybe even hoping, for some sign from Falstaff that would indicate that his wife has been untrue. We know, of course, that Ford’s wife is honorable, and so we can laugh at the poor man’s unnecessary antics. I particularly love the moment when Ford leaps into the laundry basket to search for Falstaff, a great, unexpected action.

Doctor Caius (B.J. Allman) makes his entrances and exits through the audience, and is often heard before he is seen, which works really well with his character. The entire cast is talented, but turning in particularly enjoyable performances are B.J. Allman as Caius and Leah Dalrymple as Mistress Quickly. Leah Dalrymple can achieve a lot with merely a glance, a look. There is a running gag about Dr. Caius offering men three kisses, one on each cheek and then an extra one on the lips. When Caius says “I vill cut his troat in de park,” he adds “Any park,” playing on the fact that Shakespeare By The Sea performs in various parks throughout Los Angeles County and Orange County. Jonathan Fisher is also really funny as Sir Hugh. At one point he adds a modern reference, saying, “The power of Christ compels you.” The occasional added line like that can be funny, but I do appreciate that this production refrains from doing too much of that.

I love that we come to care for Falstaff and to feel for him in the second half of the production. He has a weariness that is almost endearing. When disguised as the old woman, he flees into the audience, as if perhaps we will offer him protection. But he is increasingly on his own. Later, when he says “I will shelter me here,” he indicates Mistress Ford’s bosom. Yet he finds no shelter there either. In fact, he has to physically leave the stage in order to find a hiding spot, ducking down in front in an effort to hide himself from what he believes to be faeries. At the end, all is forgiven, and Falstaff is welcomed back into the community, a nice, touching moment.

The performance ended at precisely 9 p.m. The Merry Wives Of Windsor was directed by Cylan Brown, and runs in repertory with The Winter’s Tale through August 18th. Check out the Shakespeare By The Sea website for the schedule of performances. There is one fifteen-minute intermission, which comes at the end of Act III Scene iii. 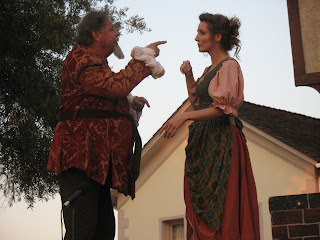 Posted by Michael Doherty at 2:13 PM