I am dating the sweetest, most wonderful woman. When we were in Boston, she surprised me with the gift of a delightful Shakespeare finger puppet. Since then, when we've been apart, I've taken photos of the puppet in various places and sent them to her with relevant lines from Shakespeare's works. The photos were meant only for her, but she said I should post them. So here are a few of the photos, along with Shakespeare's lines. 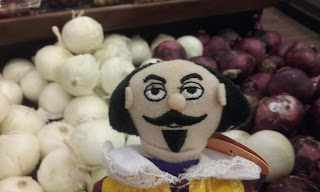 Mine eyes smell onions; I shall weep anon. 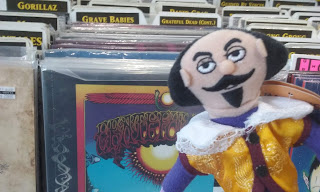 Give me some music. Music, moody food/Of us that trade in love. 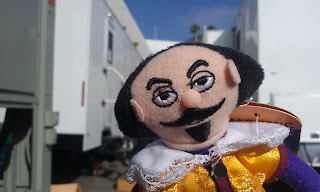 Come, sit down, every mother's son, and rehearse your parts.


Posted by Michael Doherty at 10:35 AM No comments:

Shakespeare References in A Severed Head 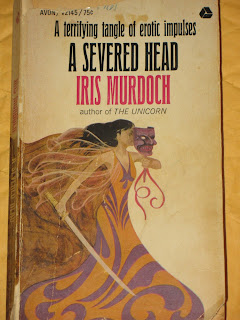 Iris Murdoch’s novel A Severed Head contains several Shakespeare references. This comes as no surprise to me, as it seems every book I read must contain at least one or two. Anyway, the first reference in this book is to A Midsummer Night’s Dream, and specifically to the song that Bottom nervously sings after his companions have fled. One character begins to quote the song: “The ousel-cock, so black of hue/With orange-tawny bill” (p. 50). And Martin, the story’s narrator, tells him, “You quote too aptly, brother.” He then asks if his brother recalls the rest. When Alexander says, “No,” Martin then recites: “The throstle with his note so true,/The wren with little quill,/The finch, the sparrow, and the lark,/The plain-song cuckoo gray,/Whose note full many a man doth mark,/And dare not answer nay” (p. 50).

The next reference is to Shakespeare himself. Murdoch writes, “To lose somebody is to lose not only the person but all those modes and manifestations into which the person has flowed outward; so that in losing a beloved one may find so many things, pictures, poems, melodies, places lost too: Dante, Avignon, a song of Shakespeare’s, the Cornish sea” (p. 77).

Twice in this book a character says, “All’s well that ends well.” The first time it is Martin who speaks the title of one of Shakespeare’s comedies. “‘Heigh-ho,’ I said. ‘All’s well that ends well’” (p. 161). This is after his wife Antonia announces that she has returned to him after an affair with another man. The second time it is Antonia who says the line. “‘All’s well that ends well!’ said Antonia, her hand impulsively meeting Georgie’s in the soft fur of the toy dog” (pages 191-192). This comes after Georgie has emerged from her coma following a suicide attempt.

Soon after that second reference to All’s Well That Ends Well, there is a reference to Hamlet. “Alexander murmured, ‘To sleep, perchance to dream…’ half audibly and then would not repeat what he had said” (p. 192). This is in the same scene in the hospital after Georgie has revealed that all the other women in the corridor had also attempted suicide. And then Iris Murdoch returns to A Midsummer Night’s Dream for the book’s final Shakespeare reference: “She said, ‘Your love for me does not inhabit the real world. Yes, it is love, I do not deny it. But not every love has a course to run, smooth or otherwise, and this love has no course at all’” (p. 197). That passage of course refers to Lysander’s famous line, “The course of true love never did run smooth.”

A Severed Head was published in 1961. The edition I read was the Avon Books edition, printed in 1966.
Posted by Michael Doherty at 10:59 PM No comments: 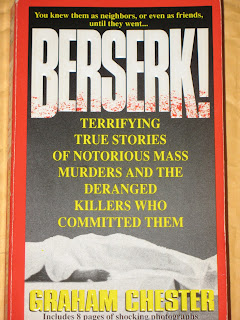 Yes, Shakespeare references continue to appear in basically every book I read. Graham Chester’s Berserk! contains a couple of references. The book is about mass shootings, something that is currently a huge problem, but it was published back in 1993. So I guess this trouble with guns isn’t all that new (though none of the shootings described here take place in high schools or grammar schools). Anyway, the first reference is in the book’s first chapter, and comes in a description of a man who shot several people: “He compared himself to Shakespeare, Schiller and Goethe” (p. 7). The second reference is to an often misquoted line from Hamlet. The line is “The cat will mew and dog will have his day,” but many people quote it as “Every dog has his day.” Well, that is exactly how shooter Frank Vitkovic wrote the line in his journal. Graham Chester includes several brief passages from that diary, including this: “Every dog has his day. Diary: 26 October 1987” (p. 177).

Berserk! was originally published in Great Britain in 1993. The edition I read was the St. Martin’s Paperbacks edition, published in 1995.
Posted by Michael Doherty at 8:21 AM No comments: