My favorite thing about summer in Los Angeles is seeing some of Shakespeare’s plays performed outdoors. This year, Shakespeare By The Sea is putting on The Winter’s Tale and The Merry Wives Of Windsor. The company is based in San Pedro, but tours both shows, performing them in various parks all over Los Angeles County and Orange County. Yes, this is the company that takes Shakespeare to you. Last night they performed The Winter’s Tale in Garfield Park in South Pasadena. The Winter’s Tale might be most well-known for its peculiar stage direction, “Exit, pursued by a bear” in Act III. Shakespeare By The Sea celebrated this element by selling T-shirts with that stage direction printed on the front, in both salmon and white (I got the salmon one).

The issue of the bear is only one of the challenges this play presents. Another is that it suddenly jumps sixteen years between Acts III and IV. The character Time, working as a Chorus, explains that jump at the beginning of Act IV. Shakespeare By The Sea, in this production, also has Time address the audience at the beginning of the play, explaining that the tale spans sixteen years. The company enters during Time’s speech, and we see Leontes (Patrick Vest) and a pregnant Hermione (Leah Dalrymple) engage in an affectionate kiss. Their young son, Mamillius (Allie Pratt), receives the gift of a plush bear, a humorous touch. This is done in place of the first scene of Act I, and the production then goes right into the second scene, with Polixenes’ speech. When Hermiones tells Leontes that Polixenes “longs to see his son,” Polixenes  (B.J. Allman) kneels down with Mamillius, a wonderful moment that shows that Polixenes misses his own son and also will help add to Leontes’ doubts about his own fatherhood. Interestingly, then while Hermione speaks with Polixenes, Leontes takes up the kneeling position with his son. What I also appreciate about these opening moments is that the love is clear between Leontes and Hermione, as when Hermione playfully teases him with her line “Never?” Both actors deliver tremendous performances in these rather difficult roles.

Perhaps the most difficult transition to make believable is Leontes’ sudden turn to outrageous jealousy, his belief that Hermione has slept with Polixenes, the turn upon which the whole play relies. That transition here is aided by the sound effect of a thunder clap when Hermione refers to Polixenes as “a friend,” leading to Leontes’ “Too hot, too hot.” Is the thunder part of a sudden storm raging in Leontes’ mind? Or did an actual thunder clap function for Leontes as an indication of the significance of that word “friend” and that touch? It’s an interesting decision, and Polixenes and Hermione continue touching hands and speaking in pantomime downstage left during Leontes’ speech, and so for a moment we see the scene through Leontes’ jealous eyes. Patrick Vest does a good job with this difficult scene. Though of course even if that transition weren’t completely believable, Shakespeare has Leontes’ men as baffled by the sudden change as we are, and so they are able to speak for us, particularly after Leontes speaks against Hermione. The only problem I found was in the repeated use of the thunder sound effect. Instead of just using it at that one moment, it is used after Leontes’ “Which draft to me were cordial” and then again after his “She’s an adulteress,” and it begins to come across as rather goofy and comical. A touching and wonderful detail is that after Leontes has sent Hermione away and sent men to the oracle, he is holding his son’s teddy bear.

This production also does an excellent job showing the strength of the relationship of Paulina (Bridgid M. Rose) and Antigonus (Chris Nelson), as when Antigonus follows his wife’s order to put down the basket containing Hermione’s baby. Paulina also shows the baby to the other men, to immediately get them on her side, another nice touch. Hermione’s trial is done really well, with the women on one side of the stage and most of the men on the other. Leah Dalrymple is remarkable as Hermione in this scene. After she says “innocence make/False accusation blush, and tyranny/Tremble at patience,” she then looks to Leontes, an excellent moment. By the way, the talk of tyrants and treason is rather timely, isn’t it? After the word of the oracle is spoken, which is done with great ceremony and solemnity, and Leontes denies its truth, there is another thunderclap sound effect. It is used a couple more times in this scene, but is truly unnecessary, as the performances are enough to completely engage us. Patrick Vest as Leontes is at his absolute best here, as when he struggles to say the words “dead bodies.” (I was seated in the front, and it looked to me like he was actually crying.)

Interestingly, in Act III scene iii, when Antigonus gives his long speech about Hermione appearing to him in a dream, Hermione herself enters upstage center and stands above him. Then, when he is about to quote what she spoke to him, her words are delivered as a recording, another interesting choice. There follows another thunder clap, but it makes perfect sense here, as it comes just before Antigonus’ line, “The storm begins.” It is here that Shakespeare’s famous stage direction occurs. This production handles it by having Antigonus exit, chased by the sounds of growling. This feels like the correct choice. After all, at this point in the play, it is not really a comedy, and someone in a bear suit running across the stage would elicit laughter. However, right after that, the play does turn toward comedy, with the introduction of the Old Shepherd (Tom Killam) and his son (referred to as Clown in the text). Both actors are excellent in this scene, and Jonathan Fisher as Clown adds a line about how being eaten by a bear is “so undignified.”

As I mentioned earlier, the character of Time begins the fourth act, mentioning that sixteen years have passed since the end of Act III (and the end of Antigonus). As Time delivers his speech, Perdita (Allie Pratt) and Florizel (Jonathan Cates) engage in a romantic and sweet kiss in the exact spot on the stage where Leontes and Hermione kissed at the beginning of the performance, a really nice touch. The last two acts of the play are comedy, a fairly major change in tone from most of the first three acts, another of this play’s challenges to a company. Helping ease that transition is having the intermission occur between the third and fourth acts. While the audience is purchasing T-shirts and going to the loo, sixteen years are passing, and things are getting lighter. Also, the action has moved from Sicilia to Bohemia, and in Bohemia things are good. There is an air of celebration, and a playful tone, in great contrast to the action in Sicilia. Perdita is absolutely adorable, particularly when handing out flowers and teasingly saying they “are given to men of middle age.” And when Autolycus (Justin Joseph) sings of his wares, the others stomp their feet and clap their hands. Even Polixenes has a jovial air about him, as he, disguised, spies on his son’s displays of adoration for Perdita. I love his funny delivery of “Have you a father?” It is interesting that Polixenes, like Leontes early in the play, suddenly turns to anger, that these two men, once great friends, do share some lesser traits.

When we next see Leontes, he enters to the sound of sad music, holding his son’s plush bear. His voice now has age and weariness to it, another nice touch. His initial reaction to the sight of Perdita and Florizel is wonderful, as he goes to his knees, finding some joy within his despair. When everyone enters for the final scene in which the “statue” of Hermione is unveiled, Time enters with them, taking a place upstage right. This final scene is excellent, and the moment when Hermione opens her eyes and moves is beautiful and magical. When Leontes says, “By us, a pair of kings,” he pauses, then takes Polixenes’ hand, another wonderful moment. Though in the text Leontes has the final speech, in this production Time is the last to speak. This is a completely enjoyable production, with a talented cast. I noticed, as I gathered up my blanket and began to leave, that everyone around me was smiling. This is a production that will leave you feeling optimistic and happy. And we can all certainly use a little of that these days.

The performance ended at 9:15 p.m. The Winter’s Tale is directed by Stephanie Coltrin, and runs in repertory with The Merry Wives Of Windsor through August 18th. Check out Shakespeare By The Sea’s website for the complete schedule of performances. There is one twenty-minute intermission, which comes at the end of Act III. By the way, there are a couple of moments in this play that might call to mind other Shakespeare plays. For example, when Leontes repeats the word “cause” in the line “If the cause were not in being – part o’ the cause,” it’s difficult to keep from thinking of Othello, another man who is jealous without cause. And when Perdita hands flowers to the disguised Polixenes, telling him “For you, there’s rosemary and rue,” she feels like a much more cheerful version of Ophelia (Ophelia also hands out rue, saving some for herself of course).

And, for those, who are curious, here is a photo of the shirt I purchased. 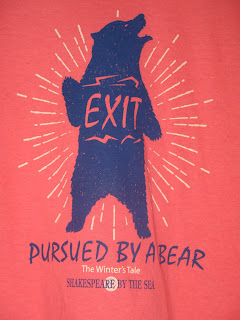 Posted by Michael Doherty at 6:29 PM