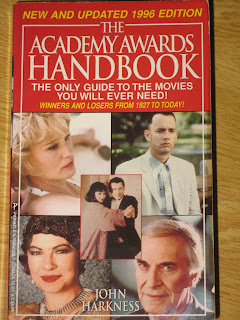 The Academy Awards Handbook, written by John Harkness, is essentially a list of Oscar winners, but also contains some thoughts on each of the awards ceremonies from the beginning up through 1994 (when that god-awful Forrest Gump won Best Picture). So the Shakespeare references are actually references to film versions, not to the plays. So I’ll just go through the years, and include the relevant films.


In the notes for that year, John Harkness writes: “Write-in votes were again allowed, which led Jack Warner to circulate a memo to Academy members at Warner Brothers asking them to ignore the nominations when necessary and vote a solid Warner Brothers ticket. It worked. Hal Mohr, the cinematographer of A Midsummer Night’s Dream, became the only write-in winner in Oscar history” (p. 41).


From 1948
In the notes on this year, John Harkness writes: “Although no campaign was mounted for Laurence Olivier’s Hamlet, even after Sir Larry had won the New York Film Critics prize as the best actor, that didn’t stop the nominations and another moment of that curious Hollywood schizophrenia that combines rampant Anglophilia with rabid Anglophobia, as Hamlet picked up six nominations and The Red Shoes grabbed five” (p. 102).

There is also a photo of Laurence Olivier from the film.

In the notes for this year, John Harkness writes: “‘The only honest way to find the best actor would be to let everybody play Hamlet and let the best man win. Of course, you’d get some pretty funny Hamlets that way.’ So spoke Humphrey Bogart, campaigning for his Oscar nomination for The African Queen” (p. 114).

In a section of Oscar trivia included in the pages on this year, John Harkness writes of instances in which actors are nominated for playing the same character in different movies. One example is: “Henry V: Laurence Olivier (1944) and Kenneth Branagh (1989) – both also nominated for directing” (p. 130).


From 1961
In the notes for this year, John Harkness writes: “West Side Story becomes the last double-digit Oscar winner, and becomes the only film with two directors ever to win best director. While there have been several occasions where people who have never met shared Oscars in the writing categories – where writer B rewrote writer A’s script and both of them got credit – Robert Wise and Jerome Robbins shared the directing Oscar after Wise fired Robbins, whom he felt took far too long dealing with the dancers after Wise had the cameras ready to roll. When the two directors came to the podium, each was conspicuous in his absence from the other’s thank you speech” (p. 164).


The Academy Awards Handbook was originally published in 1994 by Pinnacle Books. The edition I read was the updated 1996 edition.
Posted by Michael Doherty at 2:08 PM