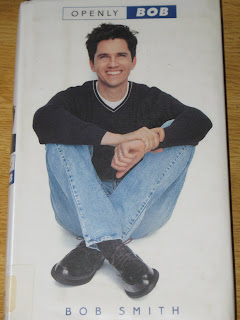 Why am I still surprised when I come across Shakespeare references in nearly every book I read? I don’t know. But there are a few references in Bob Smith’s Openly Bob. The first is to King Lear: “I was still enthusiastic and thought that it was possible to take an undistinguished line of dialogue and bring my unique interpretation to it. Whenever this insidious thought occurs to an actor, he should, paraphrasing King Lear, always remember: That way badness lies” (p. 60). Bob Smith then writes, “I felt reasonably confident about my audition because I had recently started taking acting lessons, but I had no aspirations of Shakespearean grandeur” (p. 61).

The next reference is to an anecdote that has come up several times in the past week. Bob Smith writes: “He even has an aesthetic good word for starlings (‘I love their iridescent color’), a species despised by American birders since 1888, when they were introduced here from England by a kook who wanted to establish in our country every species of bird mentioned in Shakespeare’s plays” (p. 93). (Just yesterday I watched a video about the purple martin, which also mentioned this odd Shakespeare-related story.) The final Shakespeare reference comes in the chapter on couples therapy. Bob Smith writes: “We can blame the overuse of jargon on the Fathers of Psychotherapy, Freud and Jung. They were the Shakespeares of Psychobabble, who originated the id, anima, and the Oedipus Complex” (p. 181).

Openly Bob was published in 1997 by Rob Weisbach Books.
Posted by Michael Doherty at 2:45 PM