Shakespeare Reference in Whoever Fights Monsters 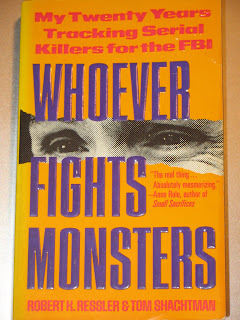 Whoever Fights Monsters, written by Robert K. Ressler and Tom Shachtman, is a book about serial killers and about profiling violent criminals. It’s certainly interesting, even though Robert K. Ressler does sometimes come across as a bit full of himself. He is certainly not above boasting at times. Anyway, the book contains a Shakespeare reference. Ressler writes: “My CID agents worked their way into groups that were planning disruptive activities, and reported back with what they had seen, not just to me but also to the FBI. Lest the reader think that this was much ado about nothing, I should point out that one of these groups had stolen explosives from Fort Sheridan and was interrupted while planning to bomb some military targets” (p. 27). The groups to which he’s referring are the anti-war student groups of the 1960s, so, yes, I was one of the readers who considered it much ado about nothing, at least as far as the necessity for the government to infiltrate the majority of them (though of course I am glad a bombing was stopped).

Whoever Fights Monsters was published in 1992. The copy I read was the St. Martin’s paperback edition from 1993.
Posted by Michael Doherty at 8:24 PM