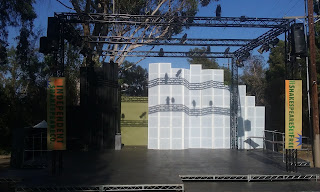 I have come to expect great things from the Independent Shakespeare Company. Still, no matter how high my expectations might be, this company routine exceeds them. And so it is with their current production of Titus Andronicus, William Shakespeare’s most violent play. Going in, I expected some excellent performances, moments of levity (this company is adept in finding humor even in tragedy), and a good deal of blood (all of which I got), but what I wasn’t expecting were moments when I was left astounded, and other moments when I had to hold back tears. This production is full of captivating performances. The entire cast is strong, but there are several remarkable performances, including those by Evan Lewis Smith as Aaron, Katie Powers-Faulk as Lavinia, William Elsman as Saturninus, and David Melville in the title role.

The set is basically the same as for A Midsummer Night’s Dream, since the two productions are running in repertory, with the only changes being that the colorful strips of cloth are gone, and instead of colorful apple boxes, there are several metal-framed tables set up on either side of the stage. Also, there is a basin on a stand upstage center, with water actually running from the bowl down the two levels of the stand. The pre-show music choices include The Rolling Stones’ “Gimme Shelter.” But no one in this play is going to find shelter, at least not for long.

When the play begins, Saturninus (William Elsman) and Bassianus (Daniel Jimenez) are on opposite sides of the audience, speaking directly to their separate factions. The audience has been divided into three parts, one part in favor of Saturninus, one part for Bassianus (I was part of this group), and one part in the middle for Titus Andronicus. It’s a wonderful way to get the audience immediately involved in what may be an unfamiliar play to many. When Marcus (Richard Azurdia) enters, he takes center stage. When he tells Saturninus and Bassianus, “dismiss your followers,” the audience does not leave, of course (though there is a bit of laughter as those in the crowd realize they’re being dismissed). Titus Andronicus (David Melville) enters from the audience with his prisoners. Rather than using a coffin, Titus’ sons carry urns that contain the remains of Titus’ other sons slain in battle. Tamora (Sabra Williams) goes down to her knees when begging for the lives of her sons, and though she without question becomes a villain in this story, at this point, because of Williams’ impassioned performance, we really care for her, and many in the audience clearly side with her. Stage smoke is used backstage to signify the fire into which Tamora’s son Alarbus is thrown (in one of the few moments where the violence is done off stage).

Titus checks in with the audience before delivering his lines about not accepting the crown. Saturninus grabs Lavinia, clearly against her will, when he says he’ll make her his empress. The action then moves so quickly that Tamora is as stunned as the audience is when Saturninus suddenly chooses her as his wife, a nice moment. Saturninus is delightfully slimy in this production. And I love how later Saturninus becomes unhinged, right at the time that Titus pretends to be. Saturninus is a weak and whiny and paranoid leader, reminding many of us of a certain dolt who is currently pretending to the president of the United States. And like that certain individual, there is humor in Saturninus’ character because of his many flaws, and because of the way they are so pronounced without his seeming to be aware of them, but he is simultaneously frightening because of this.

The characters engage in an interesting dance, a circle around Aaron (Evan Lewis Smith), then exit before he begins his first big speech at the beginning of Act II. Aaron is charismatic, even mesmerizing, as he delivers this speech, and so we can see easily why the queen of the Goths would choose him as a lover. Their relationship is intriguing. When Tamora enters, there is a flirtatious air to her voice, and she then crawls across the stage to him. She becomes even more excited when he mentions that vengeance is in his heart, and after he says revenge is in his head, they kiss. And Aaron becomes more devilish as the play goes on, perhaps in part because of this encouragement from Tamora. After chopping off Titus’ left hand, he uses it to scratch his own beard while telling the audience of his plans to bring Titus the severed heads of his sons. This is a man who has gone round the bend into dark territory, but takes such twisted delight in it that at times we cannot help but be drawn to him.

Aaron hides his coffer of gold under an audience member’s blanket, after rejecting the stage’s trap door as a better hiding spot, leaving that door open. That trap door then becomes the pit that Tamora has Bassianus’ body thrown into. Bassianus’ death is bloody. But that is nothing compared with what is to become of Lavinia. We in the audience are uncomfortable as Tamora’s two sons surround her, and as she begs Tamora for death rather than to be given to these two scoundrels. After one of the sons carries her off stage, the company gives us a moment of humor, as Aaron leads two of Titus’ sons through the audience, commenting on the food that some folks are eating. It’s a needed and appreciated breath after the intense scene with Lavinia, and before the next even more powerful scene. When Lavinia returns, it is through an upstage door that was not previously used, a nice touch. She crawls, her dress bloody, and is taunted by Chiron (Kelvin Morales) and Demetrius (Jack Lancaster), who follow her. When she opens her mouth to speak, blood spills out. Even though those of us familiar with the play expect this, it is still shocking. But it is the moment when Marcus tries to comfort her and she flinches from his touch that is most heartbreaking and captivating. Katie Powers-Faulk does a tremendous job here.

Another fantastic moment follows, when Titus kneels downstage while his sons are in front of the judges. Titus is in tears, and the reactions of his two sons to this sight are incredible. We see the surprise and concern on their faces. Clearly, they’ve never seen their father like this, which is heart-wrenching for two reasons. In addition to Titus’ despair, what gets us is that his sons never saw expressions of his love for them before. And all that is shown in just their expressions. And, while it is they who seem to face their deaths in this moment, their concern is for their father. The sons and judges exit behind Titus, so that Titus is left alone on stage until Lucius enters. David Melville is incredible in this scene with Lucius, and also when Lavinia and Marcus enter. He uses water from the basin to clean Lavinia’s face, a desperate attempt to somehow clear away the pain.

Tamora wears a mask when pretending to be Revenge, and her sons wear hoods and masks when pretending to be Rapine and Murder. I love that all three try to hide their faces from Marcus, believing that anyone besides Titus would see right through their disguises. But of course, Titus is no idiot, and he plays them while they believe to be playing him. David Melville is again absolutely fantastic in the scene when he tells the sons of his plan. And the cutting of the throats of these two rapists gets a cheer from the audience. This production does not hold back on the blood, and the draining of their throats looks great. For the strange banquet scene, Titus enters wearing a white apron and chef’s hat, drawing laughter from the audience. And his matter-of-fact delivery of the line “Why, there they are both, baked in that pie” is wonderful. The performance ended at 10:15 p.m., and it took everyone a moment to catch his or her breath before getting up to leave.

Titus Andronicus was directed by Melissa Chalsma. There is one thirty-minute intermission, coming at the end of Act III Scene i. Yes, the intermission is longer than usual, to allow time for the stage to be mopped and scrubbed. Though the show is free to attend, donations are encouraged, with cast members carrying donation buckets after the performance. There is also a merchandise booth where audience members can purchase T-shirts and sweatshirts. By the way, in 2010 I began seeing as many Shakespeare productions as possible, with the hope – of course – of seeing all thirty-seven plays (no, I’m not counting The Two Noble Kinsmen). Titus Andronicus was number twenty-six for me.
Posted by Michael Doherty at 6:13 PM