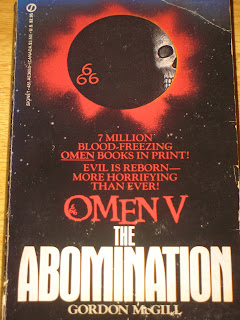 Omen V: The Abomination, a novel by Gordon McGill, contains a couple of Shakespeare references. The book was published in 1985, but takes place in the year 2000, and the first Shakespeare reference comes during a scene where a famous writer has a word processor delivered (“the very latest model,” the technician tells him). The machine uses small cassettes to display famous texts. The technician explains: “You can get all the books of the Bible from the shop, sir. Both testaments. I’ve seen their brochure. And the complete works of Shakespeare” (p. 127).

Omen V: The Abomination was published in 1985. The edition I read was the Signet paperback edition. By the way, this is not a film novelization, in case you were wondering. Omen IV and Omen V were sequels to novelizations, but not based on screenplays themselves.
Posted by Michael Doherty at 7:59 PM