Shakespeare References in Booked To Die 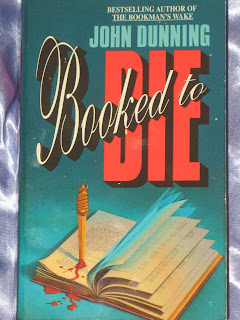 I should no longer be surprised when a book I read has Shakespeare references, particularly one that is about books, as John Dunning's Booked To Die is. This mystery takes place in the world of book scouts, and contains a few Shakespeare references. The first is a reference to Julius Caesar: "But of course I wouldn't do it. Like Brutus, I am an honorable man" (p. 62). The line "Brutus is an honorable man" is one that Antony repeats to great effect in his famous speech in Act III. And the reference works quite well in this story, giving us a clever hint at what our narrator is capable of, as well as what he thinks of himself. There is a second reference to Julius Caesar: "All I could think in that moment was that line from Shakespeare, how cowards die a dozen times before their deaths" (p. 242). It's interesting, because the line is usually misquoted as "Cowards die a thousand times" or "Cowards die a thousand deaths," not "a dozen times." The actual line from Act II Scene ii of Julius Caesar is "Cowards die many times before their deaths;/The valiant never taste of death but once."

Another reference in this novel is to Shakespeare himself, and occurs when a girl comes into the new book store: "'You've found us,' I said. 'You're a little early, though. I haven't put out the Shakespeare folios or the Gutenbergs yet, and we won't open for another week or two'" (p. 144). The last mention of Shakespeare in this book contains a reference to Romeo And Juliet. Dunning writes: "The sweet sorrow, the hate that's really love, the pull of opposites in a single emotion. Maybe they'd be lost without each other. This is the stuff Shakespeare wrote about, isn't it?" The phrase "sweet sorrow" comes from that wonderful line, "Parting is such sweet sorrow/That I shall say good night till it be morrow," which in productions is usually assigned to Juliet, following Q1, but occasionally is given to Romeo, following Q2. The First Folio also assigns that line to Romeo, and I think it makes more sense coming from Romeo.

Booked To Die was published in 1992. The edition I read is the Avon Books printing from 1993.
Posted by Michael Doherty at 11:41 AM