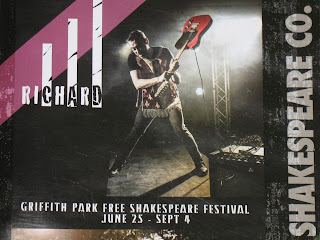 One thing I look forward to every summer is going to see the Independent Shakespeare Company perform in Griffith Park. This excellent group of actors puts on two (sometimes three) of Shakespeare’s plays each summer, and the performances are free (though donations are encouraged). For one reason or another, last year I missed both productions. So I was determined not to miss their performances this year, and last night attended Richard III. There have been some changes in the company in the past year or two, with the departure of some prominent members (two of them moved to Texas, of all places). But there have been interesting additions too, and I think William Elsman in particular (he plays Buckingham in Richard III) will end up being a key player.

At 7:10 p.m., musicians came out to take their positions upstage right. Electric guitar, bass and drums. Certainly not the usual instruments to accompany a Shakespeare performance. They were followed by the company, and after a brief mention of the sponsors, the play began. However, it didn’t begin with Richard’s famous opening lines. Rather, it began with a speech, which became a song, about “Two great houses,” Lancaster and York, delivered as a spoken word to a rock beat. There was then a short fight, followed by the crowning of King Edward, and that led directly to Richard The Third’s “Now is the winter of our discontent.” Interestingly, other characters are still on stage for this, and Richard gestures to Edward on “this sun of York.” And the other characters even chuckle at his “pleasing of a lute” line. They do then exit so that he is alone for the rest of the speech.

Richard is played by David Melville, one of the founders of the company. One of David’s main strengths is comedy, and so he finds much comedy in the role. The limp, as you might expect, is exaggerated, with David often pointing his toes inward. But it’s his way of delivering a line that draws the audience’s laughter. And there is much humor to this character, although there were some lines that drew a laugh that perhaps shouldn’t have. An example is his line to Lady Anne, “More wonderful when angels are so angry.”

There is some re-ordering of scenes, and actually some lines from the fifth act of The Third Part Of King Henry The Sixth, like “See how my sword weeps for the poor king’s death.” And I think at least one line is taken from Colley Cibber’s adaptation of Richard The Third: “You shake, my lord, and look affrighted.” We get part of Scene iii, with Margaret, before we get Scene ii with Anne. Margaret delivers her “Hear me, you wrangling pirates” line from within the audience, then steps onto the stage. This production has a much younger Margaret than usual, so Richard’s “wither’d hag” line has a different feel. She is presented as a very strong character, and for her big speech she takes center stage, with Richard moving down left just in front of the audience.

The funeral procession with King Henry the Sixth’s corpse comes from within the audience. This scene is such a difficult one for anyone playing Lady Anne, but Mary Goodchild does an excellent job with it. Richard’s “Your bed-chamber” is said with a bite, and no sweetness, an interesting choice. And then his “Your beauty was the cause of that effect” shocks her, a nice moment. He kneels and takes her hand, firmly grasping it, so she has trouble getting away. After Lady Anne spits on Richard, Richard wipes the spit from his face, then on “so sweet a place” he puts his fingers in his mouth, as to taste her spit. That’s great, though he is sort of facing away from her, making the action a little less strong. Twice Anne lifts the sword as if to strike Richard, and both times is stopped by his compliments. Finally she drops the sword and somewhat reluctantly finds some comfort in Richard’s arms. Again, this is such a difficult scene to do convincingly, and Goodchild really makes it work. Then after her exit, Richard has his “Was ever woman in this humour woo’d” speech. He takes some joy and pleasure in the speech, which is wonderful.

Another brief scene is taken from Colley Cibber’s version of Richard The Third, with Lady Anne saying, “When, when shall I have rest?” She then says, “Let me have music to compose my thoughts.” And we get a song, on guitar and vocals, with Catesby and Lady Anne singing, “Are not women truly then merely shadows of their men,” a line not from Shakespeare (or even Cibber’s version of Shakespeare), but Ben Jonson.

There are several musical cues throughout the performance, usually in the brief moments between scenes, but sometimes during the scenes and sometimes even when actors are speaking. It’s interesting having a more modern rock sound, while for the most part the actors are in period dress. The main exceptions are the two princes, one of whom wears a baseball cap (backwards) and Converse high-tops, carrying a teddy bear; the other wears an argyle sweater. It seems a bit odd, with nearly everyone else in period costume. Both princes are played by female actors, as is Catesby.

The stage is fairly simple, with just one level. As far as I can recall, this is the first of their summer productions that I’ve seen to not include a balcony or some upper level. So in Act III Scene vii, when Richard appears between two bishops, he stands upstage center (rather than at the balcony, as is usually done), while Buckingham and the Mayor move down right. In that scene, Buckingham and the Mayor lead the audience in a chant of “Richard.” Richard then goes into the crowd to shake hands and kiss babies, poking fun at modern politics, and leading into the intermission. (A prop baby was given to the woman next to me before the show specifically so that Richard would be sure to have a baby to kiss.) As they went into the intermission, there were several jokes about the current presidential race, including the promise of a wall to be built around England to keep out the Scots, a wall the Scots will pay for. The intermission was approximately twenty-five minutes.

The second act of this production begins with the fourth act. Anne says “corpse” instead of “corse” in the line “as I follow’d Henry’s corse.” There are more musical cues in the second act, as when Richard enters to sit upon the throne. Interestingly, David doesn’t really pause before the word “daughter” in the line “You have a daughter call’d Elizabeth,” so doesn’t go for the humor there. By the way, that scene between Richard and Queen Elizabeth is excellent. Aisha Kabia is particularly good as Elizabeth when telling Richard how to woo her daughter. But both she and David are fantastic throughout the scene, which is riveting.

Stage smoke is used for the entrances of the ghosts that haunt Richard’s sleep. David is excellent in this scene, especially after he wakes, kneeling, with the ghosts behind him. Evan Lewis Smith is likewise excellent as Richmond as he delivers his oration to the soldiers, in this case delivering the speech to the audience, which works to excite the crowd. He is captivating as he delivers this speech. Richard delivers his first “A horse! a horse! my kingdom for a horse!” from deep within the audience. Oddly, it got a laugh from the audience, but that might be due simply to the line’s familiarity to those who rarely read or see Shakespeare. The battle is set to rock music, and at one point Richard grabs the electric guitar and hits Richmond with it. If I could change one thing about this production, it would be to remove that bit of stage business. It feels seriously out of place. What’s worse is that because of that, the guitar remains on stage for Richard’s death, which weakens the scene.

This is the final week for Richard The Third, so make an effort to get to Griffith Park this weekend. Next week they begin The Tempest. 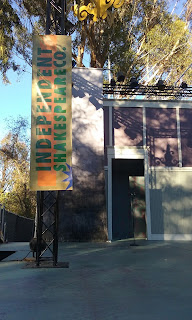 Posted by Michael Doherty at 5:21 PM