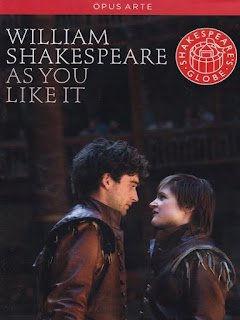 This As You Like It captures a performance of the play at in 2009 The Globe, with a tremendous cast, including Naomi Frederick, Jack Laskey, Laura Rogers and Dominic Rowan. It was directed for the stage by Thea Sharrock, and the film was directed by Kriss Russman. The performance begins with an added ceremony of Duke Frederick being crowned.

Orlando (Jack Laskey) delivers the opening speech partly to Adam (Trevor Martin), but also to the audience and at moments directly into one of the cameras. After Orlando’s “I have as much of my father in me as you,” Oliver (Jamie Parker) rushes him and the two wrestle. The two continue to wrestle through the next several lines until Adam breaks it up with his line.

After Orlando, then Oliver and Adam exit, this production goes right to the second scene with the entrances of Rosalind (Naomi Frederick) and Celia, skipping (for the moment) everything with Dennis and Charles. Touchstone (Dominic Rowan) enters and believes he’s not seen by Celia or Rosalind, but when Celia (Laura Rogers) says “this fool,” she motions behind her where Touchstone stands, a wonderful little moment. When Celia, Rosalind, Touchstone and Le Beau exit, we then go back to the first scene for the dialogue between Charlies and Oliver, an interesting choice, for now when Charles speaks of Celia’s love for Rosalind, we’ve already met both of them. Then when Oliver gives his last speech about hating Orlando, Orlando has entered stage left, getting ready to wrestle, so Oliver can indicate him during his speech. However, they both then exit, which makes Orlando’s entrance there seem contrived and pointless. After all, we know to whom Oliver is referring without Orlando having to be present. Then we return to the second scene with Duke Frederick, Rosalind, Celia and Le Beau entering, and Orlando entering separately upstage left. The wrestling match begins on the stage, but part of it occurs among the groundlings. Le Beau says, “indeed the shorter is his daughter,” cutely rhyming “shorter” and “daughter.” Rosalind and Celia appear to be close to the same height in this production, with Celia maybe an inch or two shorter.

Celia’s line about her father having “eyes full of anger” is cut.

As Duke Senior (Philip Bird) delivers his first speech, one of the lords softly plays an acoustic guitar. Amiens also speaks the First Lord’s lines, as well as those of the Second Lord. So “We did, my lord” becomes “I did, my lord.” He also says “I’ll lead you to him straight” rather than “I’ll bring you to him straight.”

In the second scene, Le Beau takes the place of the two lords.

Just before the third scene begins, Oliver appears above on the balcony, in order to place the scene at his home. Orlando is about to go in, but Adam’s “But do not so” stops him. And that leads to a tender moment between Adam and Orlando. Adam is particularly good here.

Touchstone, like Rosalind and Celia, has changed his clothes. After his “Ay, now am I in Arden,” he pretends to be excited, running around, admiring a tree and so on, until he steps in something less admirable. Then he finishes the line, “the more fool I.” And then, funnily, he pulls out his fool’s head staff, and it too has changed clothes to match Touchstone, a nice touch. Rosalind is really well cast, and is believable while dressed in male attire.

Amiens is accompanied by guitar on his song. Jaques (Tim McMullan) delivers his “More, more” in a sweetly sarcastic tone and from a seat by the audience. He then reaches the stage by “Well then, if ever I thank any man, I’ll thank you.” When Amiens asks him about “ducdame,” Jacques adds “It’s Greek” before delivering the line as written. And on “fools into a circle,” he indicates the audience at the Globe.

Orlando and Adam enter from the audience.

Jaques plays on the sexual joke of the “thereby hangs a tale” speech. Orlando enters above, then climbs down to demand food. Jaques sticks a piece of fruit at the end of Orlando’s drawn dagger, a funny touch. On “whining schoolboy,” Jaques indicates a boy in the audience. After “sans everything,” Jaques exits into the audience.

Duke Frederick pushes Oliver in. Oliver is in a torn and bloodied shirt, barefoot and weak, an extreme change in fortunes. This is great, for it helps to make more believable his later change of heart.

Orlando tosses some of his pages into the audience. The dialogue between Touchstone and Corin is wonderful. And when Touchstone adds his own poetry, he playfully dances across the stage. The poem that Celia reads is cut in half, ending with “Heaven would in little show.” In this production, it seems that Rosalind at first really has no idea who wrote the poems. Celia is great in this scene, as is Rosalind, particularly when she quickly asks her series of questions. Rosalind takes a moment after Orlando’s “Neither rhyme nor reason can express how much” before delivering her line about love being madness – and in that moment we can see that she now believes in Orlando’s love, and we can see her happiness. It’s such a great moment, and she is so good. After Rosalind and Celia exit, Orlando remains behind briefly and says, “Rosalind,” which is not in the play.

The intermission comes at the end of this scene.

Touchstone enters through the stage’s trap door and dances to the musicians who entertain during the intermission, and that leads to his lines in the third scene. Jaques is among the audience. Touchstone asks the audience, “Is the single man therefore blessed,” waits for a response, then contradicts the crowd, “No!” Sir Oliver speaks with a stutter.

Silvius (Michael Benz) reads from a piece of paper, “The common executioner…” On Rosalind’s “Down on your knees,” Phebe (Jade Williams) quickly, eagerly gets on her knees. Both Phebe and Silvius are really good.

Rosalind, in the heat of the moment, says “And I am your Rosalind” in all honesty, nearly giving up the game, but that Celia quickly mends the situation with her next line. A wonderful moment. After Rosalind’s “I do take thee, Orlando, for my husband,” they kiss. It’s clear that she knows they are in fact married at this point. And it seems that Orlando realizes she is really Rosalind.

Scene 2 is cut, so that as Rosalind and Celia are exiting, Silvius rushes in and catches them before they go. Silvius grabs the letter and reads aloud the last portion, rather than Rosalind reading it all, as he realizes what it means. It makes us feel more strongly for Silvius. When Oliver tells the story of Orlando’s deeds, Celia and Rosalind’s lines are cut, a cut which then renders his “Twice did he turn his back and purpos’d so” nonsensical, as it is in response to Rosalind’s question. But I do love Oliver’s delivery of “And found it was his brother, his elder brother,” with a quiet shame entering his voice. After Rosalind faints, as Oliver helps her up, he in doing so inadvertently touches her chest, and quickly removes his hands. Clearly, he knows something is up.

Touchstone and Audrey’s first lines from Scene 3 are delivered at the end of Scene 1.

Because Oliver has felt Rosalind’s chest, his “And you, fair sister” has a stronger meaning. And the line causes Rosalind to pause briefly. Also, it gives clear meaning to Orlando’s “Ay, and greater wonders than that.” Rosalind’s line about the magician is cut. She goes from “strange things” to “If you do love Rosalind.” The second line about the magician is likewise cut.

The lines about the bargain from Scene 4 are added to Scene 2. So from Scene 2 we go to partway into Scene 4, beginning with Duke Senior’s “I do remember in this shepherd boy/Some lively touches of my daughter’s favor.” Hymen speaks his first lines from within the audience. It is Le Beau who delivers the lines about Duke Frederick’s sudden conversation. And so Duke Senior says “Welcome, Le Beau” instead of “Welcome, young man.” Music starts, and Jaques’ “by your patience” stops it. Jaques says “What you would crave” rather than “What you would have,” presumably to keep the rhyme intact with current pronunciation. After “delights,” there is a dance. After the dance the cast remains on stage, and Rosalind delivers the epilogue. On “If I were a woman,” she lifts her dress to reveal the trouser she wore when disguised as Ganymede. And the entire cast bows with her.

The DVD includes a photo gallery of the cast members.
Posted by Michael Doherty at 9:08 PM