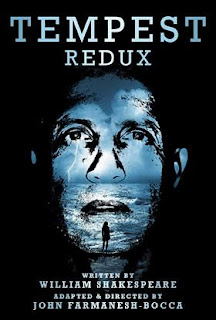 John Farmanesh-Bocca’s new adaptation of William Shakespeare’s The Tempest, titled Tempest Redux, takes the play in a different and intriguing direction, while still using the text. In the First Folio, The Tempest is the first play presented, and it is listed under the Comedies. In the first version of the complete works that I read, The Yale Shakespeare, it is the last play presented, and it is listed under Tragedies. Without giving too much away, let’s just say that this production could fit well in either position.

As the audience enters, there is the sound of sea gulls and of waves lapping the shore. As for the set, there are a few rocks at corners of the stage, and a few tree stumps as well. A small model of a boat is placed downstage center. Several minutes before the play begins, Prospero (Jack Stehlin) enters and stands upstage center, facing away from the audience. And while the house lights remain on, the other characters enter and assume meditative postures on stage, seated cross-legged with their hands open upon their knees. When the play starts, some simple yet very effective lighting and sound effects simulate the storm. Prospero holds the model of the ship up, a great way of showing that he is orchestrating the storm, with the help of Ariel. Ariel in this production (as in many productions) is female, and (unlike any other production I’ve ever seen) is actually played by three actors (Shea Donovan, Briana Price, Emily Yetter). The Ariels surround Prospero downstage during the tempest, while the other characters react upstage and deliver the Act I Scene 1 lines. It is well choreographed, and is a wonderful, imaginative and effective way of presenting the storm and opening this play.

When Miranda enters, Prospero seems tired from the energy he expended in causing the storm, a very nice touch. When Prospero tells Miranda about their voyage to the island, Miranda sits cross-legged, adopting the same posture as the others did before the play started. And the tale Prospero tells is acted out by the other characters (he is handed his books, and so on). Ariel’s voice is done in an unusual way – it is played over speakers to give it a louder and eerier feel (while the three actors also speak the lines). On Ariel’s line “My liberty,” the three women surround Prospero. The three tree stumps function as the prisons for the three Ariels. Prospero gives a somewhat playful, even a bit goofy, delivery of some lines. There are certain signs that he is perhaps a bit unhinged.

Gildart Jackson is really good as Alonso when he is overcome with drowsiness. Interestingly, when Antonio (Dennis Gersten) says that if Alonso and Gonzalo (renamed Adrian in this production, a combination of the two roles of Gonzalo and Adrian) were dead they’d be no worse than they are, Alonso moves just a bit in his sleep, a nice touch. The characters have daggers, not swords, in this production, though they still refer to them as swords. There are two moments when characters move forward to do something not written in the play and are stopped by the three Ariels, who then are able to reverse time. Both times it is to prevent characters from doing violence, from doing something Shakespeare did not have them do. It’s almost as if the characters are getting out of line, and the three Ariels are working on Shakespeare’s behalf, to bring them back to the play, to have them serve Shakespeare’s desires and not their own.

In addition to three Ariels, this production has two men playing Caliban, a strange choice. Both men also play other roles – Sebastian and Adrian. As Caliban, they work in conjunction, on each other’s shoulders and sharing lines and so on. The spectacle of this takes a bit away from the sympathy we might have for the character. And because of the well-choreographed movements of the two men, Caliban doesn’t seem as weak or vulnerable, and certainly not as alone. It is a bit distracting, as there is the question of how the other characters see Caliban – as one entity or as two men. For when Trinculo is under the tarp with both Calibans, Stephano still delivers his line as “four legs,” not six. And interestingly, the two Calibans are facing opposite ways, with Trinculo lying across the two of them, so that when Stephano lifts each end of the tarp, he sees a head of Caliban. And because Caliban is two men, it makes their calling him a monster seem less cruel and silly, and more accurate. By the way, as you might expect, the roles of Trinculo and Stephano provide a lot of laughs. These roles are handed really well by Dennis Gerten (who doubles as Antonio) and Gildart Jackson (who doubles as Alonso). I love the little pause that Stephano adds after “I prithee now lead the way” before “without any more talking.” There are a lot of nice touches like that.

Mimi Davila is really good as Miranda in the scene where she first sees Ferdinand, with the right amount of youthful innocence and excitement in her delivery of lines like “I might call him/A thing divine.” There is a bit of silly business accompanying Prospero’s “Put thy sword up,” with Prospero causing Ferdinand’s arm to extend straight up into the air and to remain like that under Prospero’s power. And both Ferdinand and Miranda are adorable in their next scene when Ferdinand is going about the tasks given him by Prospero. Though Ferdinand’s “I do think a king” is spoken with happiness, when that line should be touched with sadness, for what he’s saying is that he thinks his father is dad. And the pageant scene is done in an interesting and imaginative way, taking place basically in the minds of Ferdinand and Miranda, with the aid of Prospero and the three Ariels and some images projected on the back screen. It’s actually a sweet and pretty moment.

This production does include quite a few cuts and some re-ordering of scenes as well. For example, the most famous speech of the play comes at a different time. And because of the doubling up of roles, Caliban, Trinculo and Stephano are not present at the climax. But the way the last scene is handled will certainly cause you to think about the play and these characters, particularly Prospero, in a new way.

The production is approximately an hour and a half, without intermission. It runs through April 10, 2016. The show I saw was the final preview, so it’s possible that some more tweaking has occurred in the meantime. Tempest Redux was adapted and directed by John Farmanesh-Bocca. The Odyssey Theatre is a 99-seat theatre located at 2055 South Sepulveda Blvd. in Los Angeles. There is a small parking lot in the front, and the cost to park there is $4, but I had no trouble finding a spot on the street.
Posted by Michael Doherty at 1:36 PM