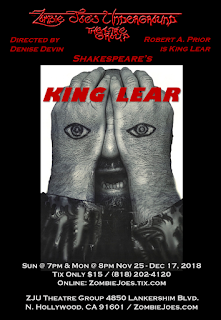 The new production of King Lear at Zombie Joe’s Underground Theatre in North Hollywood shows how effective the great tragedies can be in an intimate space without much in the way of sets. With only a long black box up center and a three-step black box stage left as set pieces, and without backdrops, the focus is entirely on the performances.

When Kent (Tom Trudgeon) and Gloucester (Paul Carpenter) enter for the first scene, Edmund (Saint Ranson) is already on stage. He doesn’t react to Gloucester’s rather insulting words about him, but instead maintains a neutral expression. Later, in the second scene when he is alone, he is finally able to react, able to let out what he held in before, and his anger erupts. When King Lear (Robert A. Prior) and the others enter, Lear goes up the three steps, while the others form a line upstage, so that Lear is above them, the proper place for a king. Goneril (Sasha Ilford) is caught off guard when asked to voice her love for Lear, which is nice. Clearly she had not planned any words for the occasion, and isn’t sure just how much to say. When it is Regan’s turn, she is ready because she’s had a moment to prepare something while Goneril spoke. The production is done in period costume, and both Goneril and Regan (April Sigman-Marx) are in regal purple, with Regan wearing red beneath, perhaps an indication of her more bloodthirsty personality.

On Lear’s “Nothing will come of nothing,” he steps down to everyone else’s level. And on Cordelia’s “and true,” she takes Lear’s face in her hands, lovingly touching both cheeks, and perhaps it is that touch that helps make Lear turn on her. This production does a lot with touch, actually. On Lear’s “did hold her so,” he grabs Cordelia (Carlita Penaherrera) by the back of the neck and leads her to the steps. When she stands above everyone, it is more like she stands atop a scaffold than a throne, a nice touch. When France (Luc Rosenthal) takes her hand and leads her back down, his lines are spoken just to her rather than to those assembled, making them more intimate and thus more honest, more true. By the way, Cordelia and Kent are both dressed in similar colors, a light blue, helping to draw a deeper connection between the two banished but true characters.

When Kent appears disguised, he has shorter hair and wears a hood. And when Lear enters, it is happily. His is carousing with his men, and it is striking, because this moment is the most joyful we have seen him, and the most joyful we will see him. It is the only moment when he believes the choice he made is working out for the best. In this production, Kent does not actually trip Oswald.

One of the production’s best performances is by Carlita Penaherrera as the Fool. Yes, the same actor plays Cordelia and the Fool, as it is believed was done during Shakespeare’s day, though of course now that actor is female rather than male. As the Fool, she wears a blond wig and affects a different voice. This casting gives several of the lines a different or stronger meaning. Such as when the Fool asks “Can you make no use of nothing, nuncle?” Lear’s response, “nothing can be made out of nothing,” of course reminds us of his response to Cordelia’s “Nothing.” And here Lear seems aware of it too, giving a slight pause after “made out of.” And the Fool is the recipient of Lear’s affections in a way you feel Cordelia was meant to be. It is almost like Lear is able to do right by Cordelia by doing right by his Fool. There is also the idea that Lear eventually becomes the Fool, making the Fool no longer necessary. This idea is planted early on when on the line “That thou wast born with,” the Fool puts his fool’s cap on Lear’s head.

When Goneril enters, Kent goes and sits in the audience, as if concerned she would recognize him. That’s a really nice touch, for it shows how the people closest to Lear believe he is not in complete control of his faculties already – that Goneril but not Lear would recognize Lear’s most loyal man. I also love that in this scene, Goneril is still gentle in her speech, at least at first. And she becomes so upset, nearly in tears, when her father curses her and delivers the “thankless child” line. Ilford is excellent here. You really feel for Goneril, which I appreciate. Goneril has never seemed an inherently evil character to me. And Lear is behind her, and so not seeing her face, which actually works to make us side with Goneril even more. Cornwall (Anthony Feole), on the other hand, has something of an evil grin from the start, his look and demeanor sort of announcing that he’s a villain.

Both Edmund and Edgar (Christian Sullivan) are fantastic in the first scene of Act II when Edmund is putting into action his plot against Edgar. I love the moment when Edmund hits his sword against the sword of a baffled Edgar, trying to get him to pretend to fight. Edgar’s transformation to poor Tom is handled really well, with him removing his pants and tying his white shirt around his waist. On the lines about dirtying his face, he reaches to the floor as if for mud, and his performance is so compelling that I believe he has found mud and grime there. And his delivery of “That’s something yet” is absolutely fantastic, nearly stunning. In a later scene, when Gloucester enters, Edgar tries to hide his face from him. His performance as poor Tom is captivating, and he does not hold back at all.

Robert A. Prior has many excellent moments as King Lear, like in the scene where he demands to see Regan. Then, after Goneril has entered, at one point Lear starts to embrace her, when he tells her she is “my flesh, my blood, my daughter.” Then he suddenly turns on her. It is interesting how often physical contact in this production turns violent, the main exception being contact with the Fool. When Lear says “O, fool, I shall go mad,” he puts his arm and the fool, and waits for Goneril and Regan to part so they can pass between them, a wonderful moment. As for the famous storm scene, this production uses sound effects and a lighting change, but the storm is sold to us especially by the Fool’s movement against it. Once again, Carlita Penaherrera does an excellent job here. For the trial scene, when Lear says “Thou robed man of justice,” he indicates Edgar. As for Goneril, a male audience member in the front row is indicated rather than an empty stool. Yet the Fool’s line about the joint-stool is left in, which then doesn’t quite work. Lear’s delivery of “Make no noise” is so earnest as to be heart-breaking. Robert A. Prior is quite adept at making the straightforward delivery of a line completely heartrending, as he does again later with “If you have poison for me, I will drink it.” The Fool’s last line in the play, “And I’ll go to bed at noon,” is delivered directly to Lear. Then, when we next see Lear, he is wearing the Fool’s hat, which is interesting, not only because it suggests Lear has accepted his role as fool, or at least that he is aware of it in some manner, but also because it really raises the question of what exactly happened to the Fool. Did he simply give Lear the hat, understanding that Lear had taken over his role until he was no longer needed? Then, on his “stage of fools” line, Lear removes the cap. By the way, Lear’s “scurvy politician” line received a bit of a cheer, understandably given our current political horrors.

As I mentioned earlier, Regan has a bloodthirsty streak to her personality, and there are some fantastic moments where she truly delights in it, to the point that you wonder if this isn’t perhaps her truest self at last. For example, after killing the servant who tried to stop Cornwall from blinding Gloucester, Regan actually licks the dagger. And she takes great joy in that wonderful line, “Let him smell his way to Dover.” April Sigman-Marx is particularly good in this scene, and the moment when she steps away from her husband when he asks for her hand is chilling. It is especially so because a moment earlier she had killed the servant who had turned on her husband, and so we see that it wasn’t in her husband’s defense that she killed him, but perhaps more for her own joy.

One element in this production that does not work is the use of sound effects in the scene where Gloucester is led to what he believes is a cliff. When Edgar is trying to convince Gloucester that he’s brought him to his desired destination, he asks Gloucester, “Hark! do you hear the sea?” At that point, we hear sound effects of waves against the shore. But of course Edgar has not brought him to a cliff at the edge of the sea, and Gloucester even answers, “No truly.” He doesn’t hear the sea because he is not at the sea. The question is, Why do we hear the sea? Interestingly, the sounds stop during Gloucester’s renouncing-the-world speech.

The sword fight between Edmund and Edgar is quite brief, but the ending with Lear and Cordelia is not rushed. Lear’s cries of “Howl” are long, loud and anguished. And he holds onto Cordelia longer than usual, cradling her, which feels right. On his “my poor fool is hang’d,” Lear looks at Cordelia, the moment given extra meaning because of the same actor playing both roles. I am always excited to see how a production will handle Lear’s last moments, when he urges those around to look at Cordelia. Does he, just before dying, believe that Cordelia lives, and so dies happily? Or is it that as he passes into the next realm he actually does see her? Or is he overcome with madness? In this production, as he says “Look there, look there,” he first looks at Cordelia, then looks up, as if Cordelia is rising. But actually Lear is falling backwards, and that causes his head to look upward. What a fantastic way of delivering that moment! It is a strong finish to a really good production.