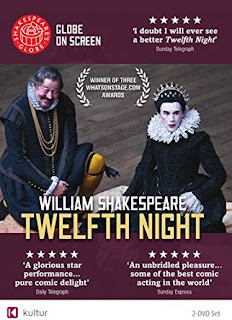 I love the Globe On Screen Shakespeare series, particularly as I haven’t yet had a chance to visit this theatre. The productions that I’ve seen so far have been excellent. The Globe’s Twelfth Night is especially good, in part because of its phenomenal cast which includes Stephen Fry as Malvolio, Mark Rylance as Olivia and Johnny Flynn as Viola. Yes, it’s an all-male cast, giving us even more of a taste of what the original audience would have experienced. The production was directed for the stage by Tim Carroll, and the screen version was directed by Ian Russell. There is one intermission, coming at the end of Act II. The second half is on the second disc of this two-DVD set. Musicians play as the actors get ready and the crowd settles in.

Orsino (Liam Brennan) steps downstage, and the musicians above cease playing, leading him to speak the play’s first line, “If music be the food of love, play on!” Viola rises from a trap door in the floor, as if rising out of the sea. As I mentioned, this is an excellent cast, but Paul Chahidi as Maria is especially good. On “he’s drunk nightly in your company,” she takes Sir Toby’s drink from him. On “in this company,” Andrew (Roger Lloyd Pack) nods at the audience, getting a laugh. The exchange between Andrew and Maria is wonderful. When Viola appears as Cesario, she is dressed in man’s attire, but still wears the long wig. On “a woman’s part,” Viola gives a little nervous laugh. Feste (Peter Hamilton Dyer) carries a pipe and drum, and plays both in his first scene. Olivia is in mourning attire, a black veil over her face. Her line “Take the fool away” is delivered simply and gets a big laugh. There is a moment when it seems Toby (Colin Hurley) might be having a heart attack, and the others all rush over to aid him, a nice moment showing that he is cared for. Of course, his ailment turns out to be something else entirely, leading to his line, “A plague o’ these pickle-herring.” And the others quickly step away from him. There is some humor in the way Olivia moves about the stage, almost gliding under her skirts. Olivia is particularly funny after Viola exits. On “he left this ring behind,” Olivia struggles to take her ring off. She is absolutely fantastic in this scene.

Samuel Barnett as Sebastian wears a similar wig to that worn by Viola, which works well. Malvolio tosses the ring at Viola, and it bounces off her chest. Viola’s reading of “I am the man” is delightful. Feste sings “O Mistress Mine” without accompaniment on his instruments. It’s a touching moment, and the camera gets close on him. There is some funny business as Malvolio enters to scold the merry group. Toby gives a nice pause before resuming his singing in response to Malvolio. I love Maria’s delivery of “I know I can do it.” I love the joy she takes in making sport of Malvolio. Andrew’s reading of “I was ador’d once too” in this version feels like the beginning of a story that he wishes to tell; but Toby, either not hearing that or not caring, doesn’t reply. We see Orsino begin to take a fancy to Viola on the lines “And dallies with the innocence of love/Like the old age.” For this song, Feste is accompanied by the musicians above. During the song, Orsino sneaks looks at Viola. Malvolio is great as he imagines himself above Toby. And when Malvolio finds the letter, Toby, Andrew and Fabian move the bush that conceals them closer to him. Malvolio takes a long time before he concludes that the “M” means Malvolio. Malvolio exits joyfully, then comes back a moment later for “Here is yet a postscript.”

The musicians above perform before the play resumes after intermission. This act begins with Feste leading most of the cast in a song. They retreat off up center, and Viola enters for the first line of Act III. Olivia is wonderful when she in vulnerable in asking about the ring. And I love how excited Maria is when she comes to Toby and Fabian to describe Malvolio. And her delivery of “He’s coming, Madame” to Olivia is hilarious. Olivia adds an “O” in “Here, wear this jewel for me; ‘tis my picture,” saying “O, ‘tis my picture,” pretending to discover in that moment that her picture is contained therein. A delightful moment. The play moves at a quick pace through these scenes. The forced duel between Viola and Andrew is hilarious.

Olivia is fantastic when protecting Sebastian, believing he is Cesario. And she kisses him. She then faints before Sebastian says “What relish is this?” And her surprised “O” is perfect when Sebastian agrees to be ruled by her. Malvolio is locked up below the stage, his head appearing behind bars just above the trap door. Olivia says “Blame not this haste of mine,” then signals for the priest to come in, a nice touch.

The reactions to “Husband, stay” are wonderful. Viola is so amazed that she checks her hands for rings when the priest mentions the rings, which is nice. You feel for Andrew when Toby calls him an “ass-head and a coxcomb and a knave, a thin-fac’d knave.” Olivia’s delivery of “Most wonderful” is fantastic. Orsino mistakenly first delivers his line to Sebastian rather than Viola. Feste remains downstage right to sing the final song as the others exit. Then, before the end of the song, they re-enter, and the company engages in a playful dance.

This production of Twelfth Night was released as a two-DVD set on April 25, 2015.
Posted by Michael Doherty at 7:18 PM