Shakespeare References in The Art Of Star Wars Galaxy 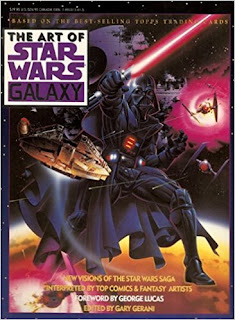 Shakespeare is mentioned everywhere, it seems, even in a galaxy far, far away. Well, in a book about a galaxy far, far away anyway. The Art Of Star Wars Galaxy, edited by Gary Gerani (and with a foreword by George Lucas), contains a couple of Shakespeare references. The book takes a look at the art, artists and subjects of the series of Topps trading cards titled Star Wars Galaxy. On a page about Grand Moff Tarkin, regarding actor Peter Cushing, it reads, “Cushing also had roles in several film classics, including Laurence Olivier’s Hamlet and John Huston’s Moulin Rouge” (p. 50). And then on a page about Darth Vader, regarding the two men who played the part, it reads, “It took two actors to portray the Dark Lord of the Sith: David Prowse, the undefeated weightlifting champion who was physically inside the awesome costume; and James Earl Jones, the celebrated Shakespearean actor who lent his imposing voice to the character” (p. 90).

The Art Of Star Wars Galaxy was published in November of 1993.
Posted by Michael Doherty at 9:46 PM