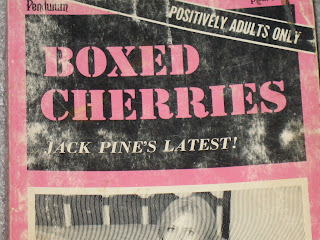 Boxed Cherries tells the tale of a father who hypnotizes his daughter into being his sex slave. Bruno Hancock also hypnotizes his piano students into having sex with him. But do they also learn to play the piano? We don't know. Can this guy even play piano? Is he any good? What is his musical background? The book fails to delve into this area at all. Yet parents are constantly dropping off their daughters to be taught by this guy. So there must be something to him; he must have some skill in that area. Perhaps he should hypnotize them into being great pianists. Would that work? Just take a few moments to do that, then have sex with them. After all, wouldn't the girls' parents expect them to show some improvement in their playing after several sessions with this guy?

Well, as far as these sorts of books go, this one is fairly well written. This line made me laugh: "The mere thought of taking his penis in any of her orifices gave her the feeling of being strangled in the hangman's garden of lust by the phallic noose of satan." Is this the work of a frustrated poet or what?

Boxed Cherries was published in 1969 by Pendulum Books, Inc.
Posted by Michael Doherty at 5:49 PM